The term Friendsgiving seems to have come into some amount of popularity over the past few years. Friendsgiving, if you don’t know, is a separate Thanksgiving celebration usually held the weekend before or after the holiday when friends gather for another meal. I fully support the idea of Friendsgiving. Another day of gluttonous eating and a chance to celebrate with other people you love? Yes, please.

But when you’re an expat Friendsgiving is Thanksgiving. When you’re an expat your friends become your family. I’ve said it before, but expat friendships develop quickly and strongly. So it makes sense to break bread with the family you’ve created in your adopted country on the fourth Thursday in November because you’re thousands of miles away from your own. 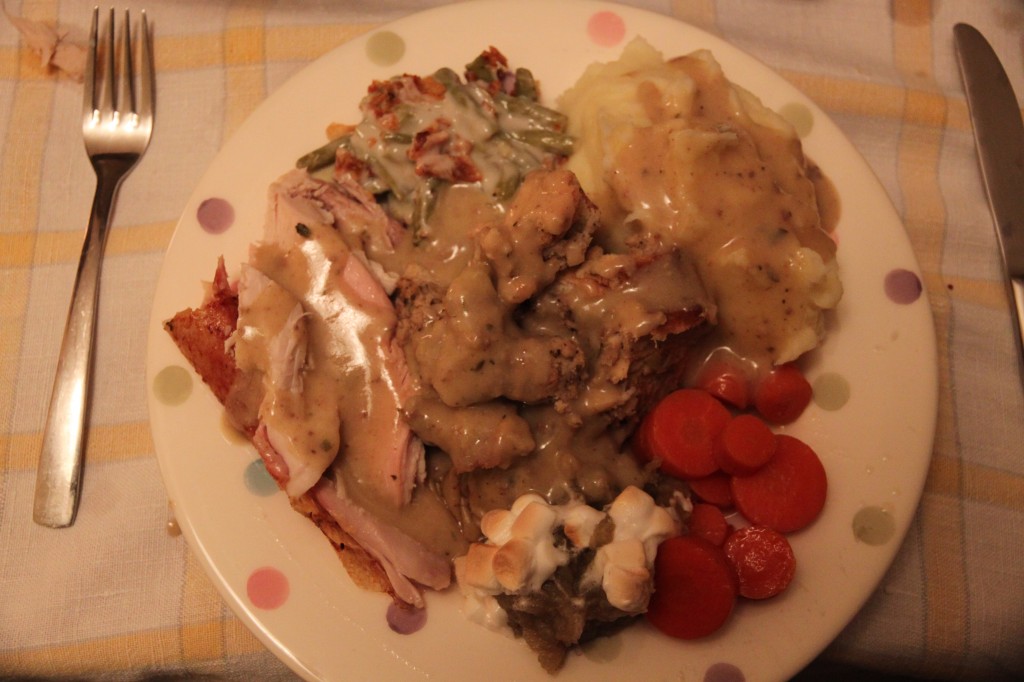 This was my fifth consecutive Thanksgiving away from the United States. Every year but one I’ve celebrated in some way, from a mini feast with my host family in Rome to a meal in a pub that culminated in abortion shots with friends, I always make time for my favorite holiday.

This year, though, I wanted to actually have Thanksgiving. I finally live in a country with easy access to all the necessary ingredients. I have an oven and space to host. And I have a lot of free time. So it was decided that a Thanksgiving dinner would be held at my little flat in Richmond.

I would make the turkey, stuffing, and mashed potatoes, Meghan would take on marshmallow yam casserole and a salad, Alicia would contribute green bean casserole and a pumpkin pie, and Claire would prepare glazed carrots and the gravy. Everything you need for a Thanksgiving dinner!

On Monday Claire and I went grocery shopping for everything we’d need to prepare this rather large meal. Claire was shocked by the large amount of everything I was buying (“Do we really need that huge stick of butter?”) but if I was doing this, I was doing it in a truly American go big or go home way. Except for the turkey. The turkey had obviously not been injected with a mass amount of hormones and looked like a large chicken rather than the enormous birds I was used to in the States. (Probably a good thing.) 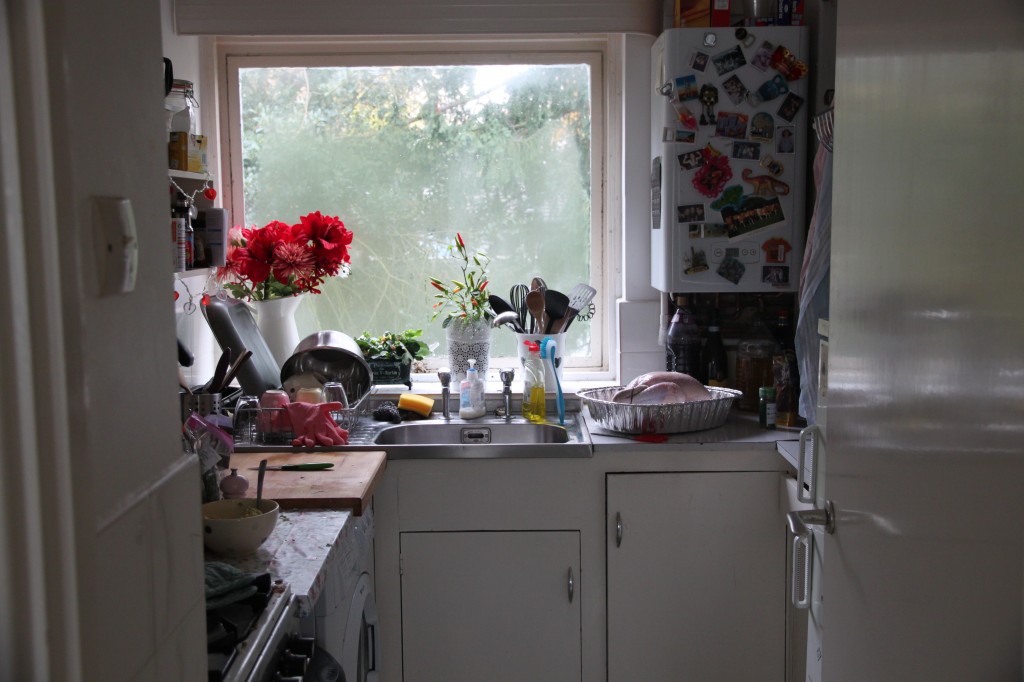 Speaking of the turkey, when we got home I realized that I was not only cooking a turkey for the first time and preparing a meal for 8 people, I was also doing to be doing it in the world’s smallest kitchen. In lieu of defrosting the turkey in the refrigerator, it defrosted in the communal laundry room, and the bread for the stuffing dried on our only large table. In the living room. 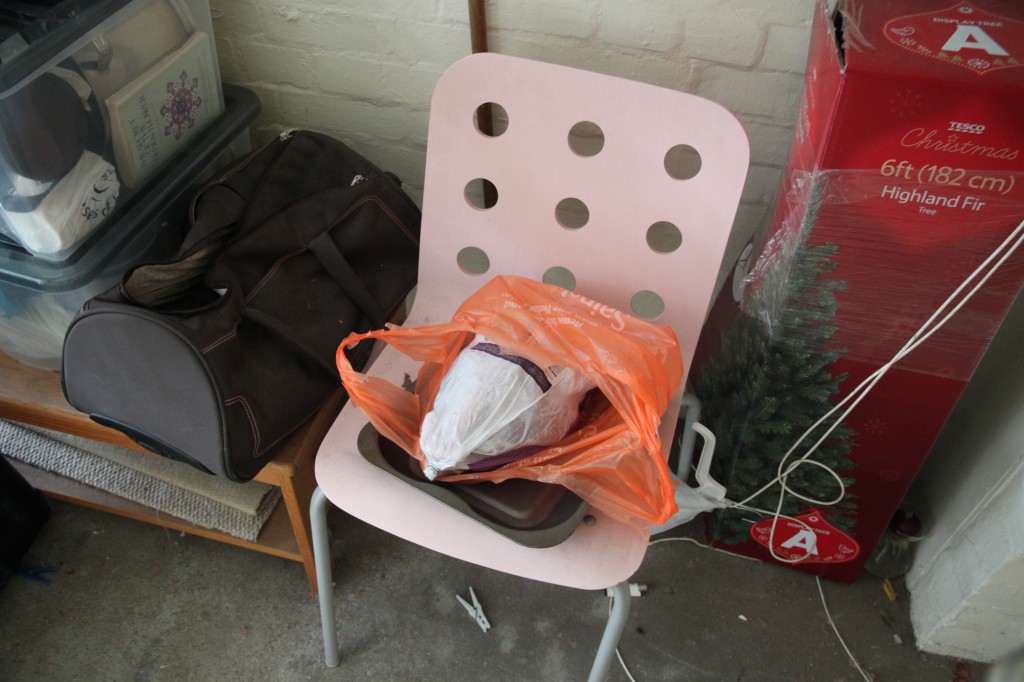 Doesn’t everyone defrost their turkey in a storage room? 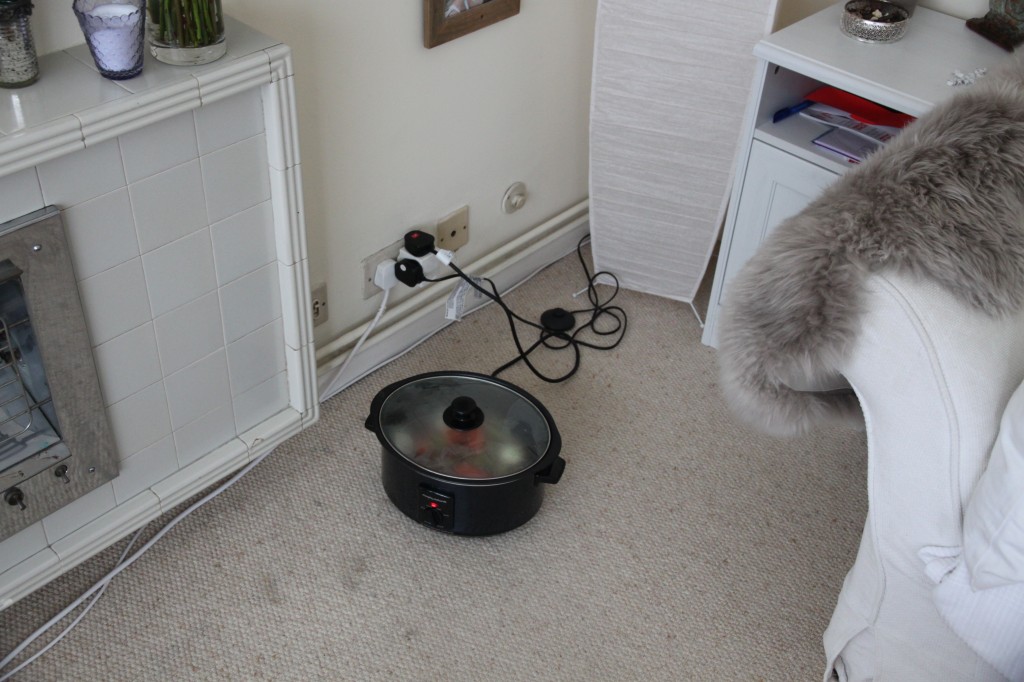 And cook their gravy in a crock pot on the living room floor?

Thursday morning arrived and I was anxious. I had a lot of things to prepare and a lot of people to please. Once the stuffing was prepared and put into trays and the potatoes were peeled and cut I had to deal with my nemesis- the cooking of this turkey. I decided to use Tom Colicchio’s herb butter turkey recipe in hopes that my inexperience in cooking large fowl would be offset by the large amounts of butter. 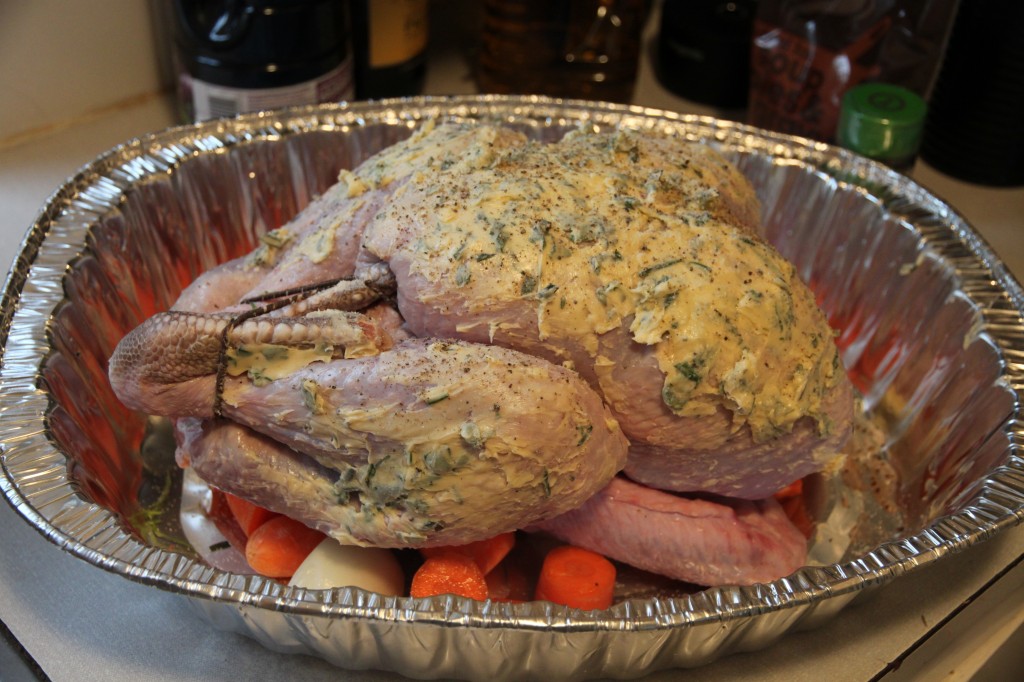 Millicent before being cooked.

And even though I cooked the turkey at a temperature about 100 degrees lower than what I was supposed to for the first two hours (damn old English ovens and gas marks instead of temperatures), it turned out spectacularly. 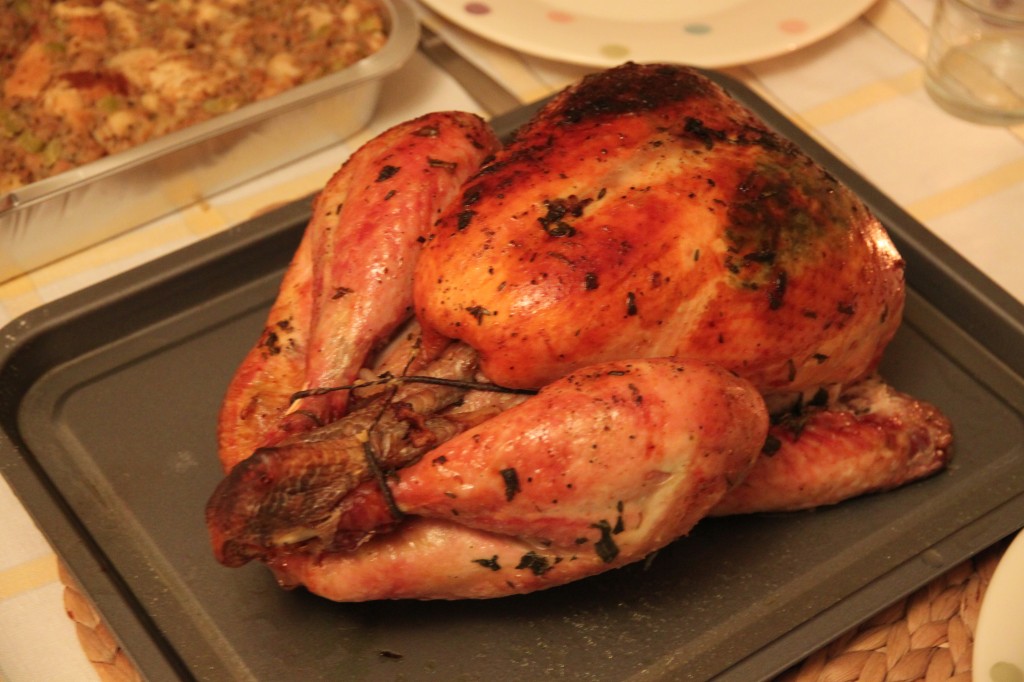 The last thirty or so minutes were hectic with everyone trying to put the finishing touches on their dishes. We had a rather severe burn, the rolls were remembered seconds before they turned completely black, and all the dishes wouldn’t fit into the oven. But in the end, everything ended up at the table. And was delicious. 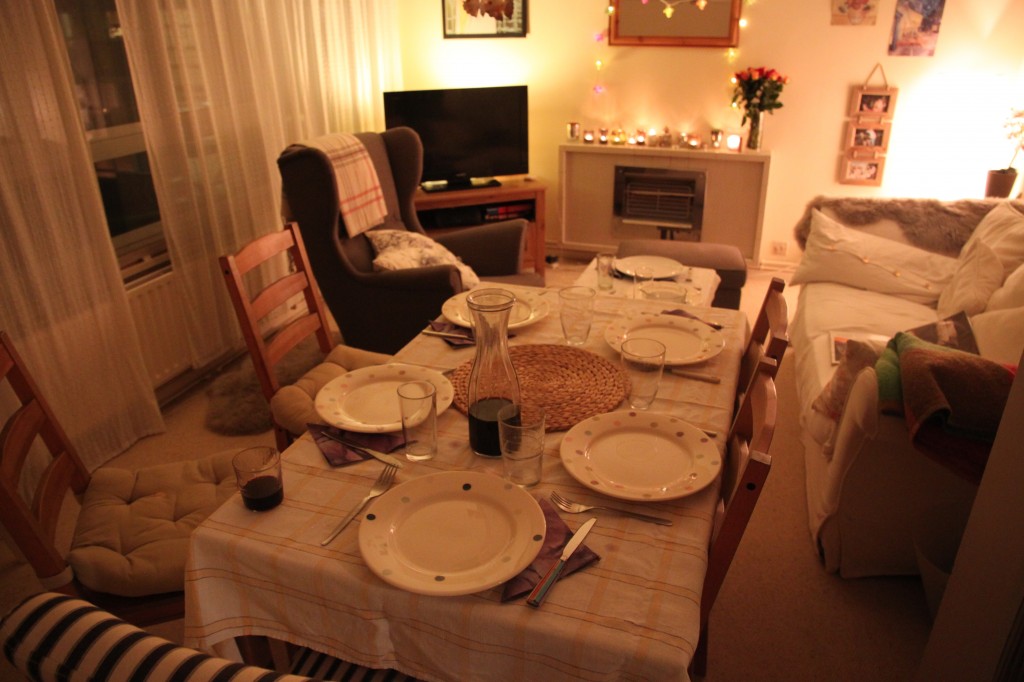 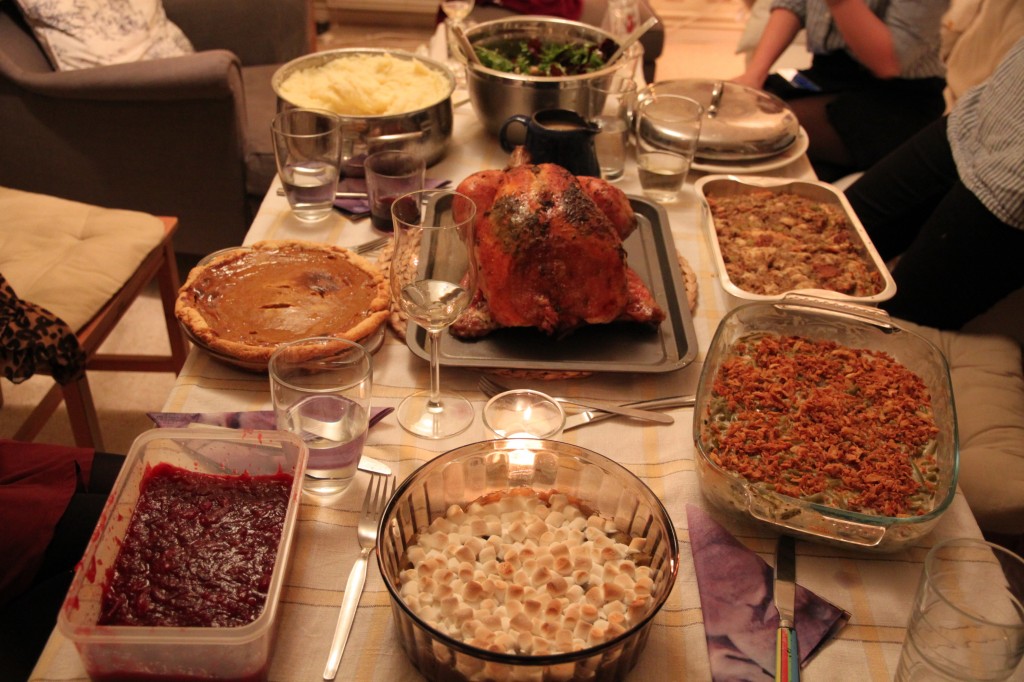 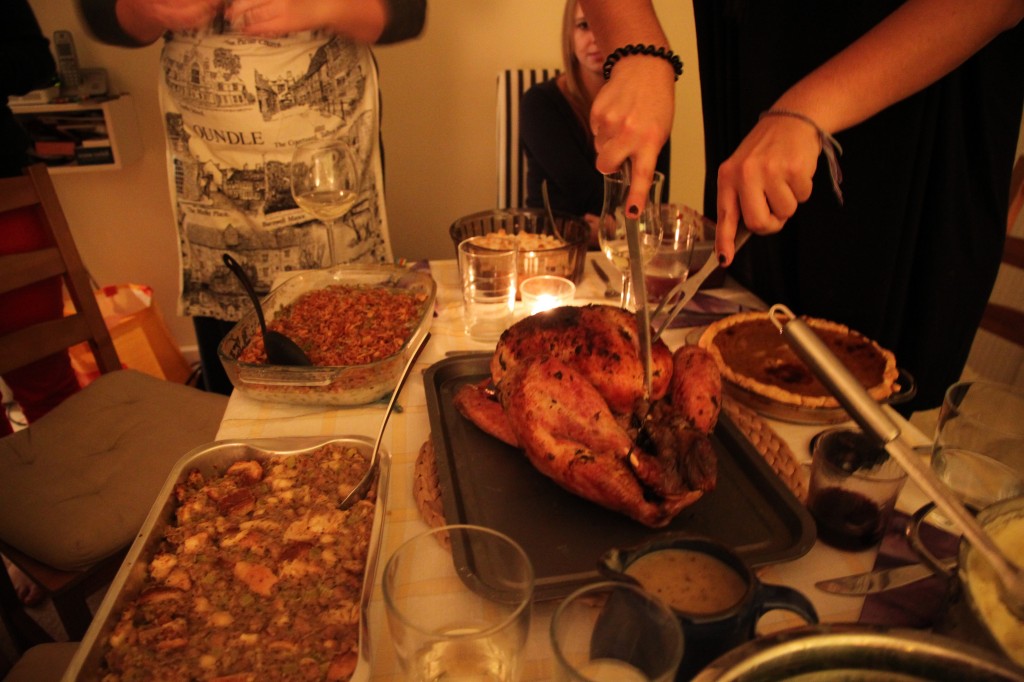 Eight of us, five Americans and three Brits, gathered around the table where we ate too much, drank a lot of wine, and told stories that would probably never get told at a family Thanksgiving. The stress of the day was more than worth it for this successful Friendsgiving Thanksgiving. 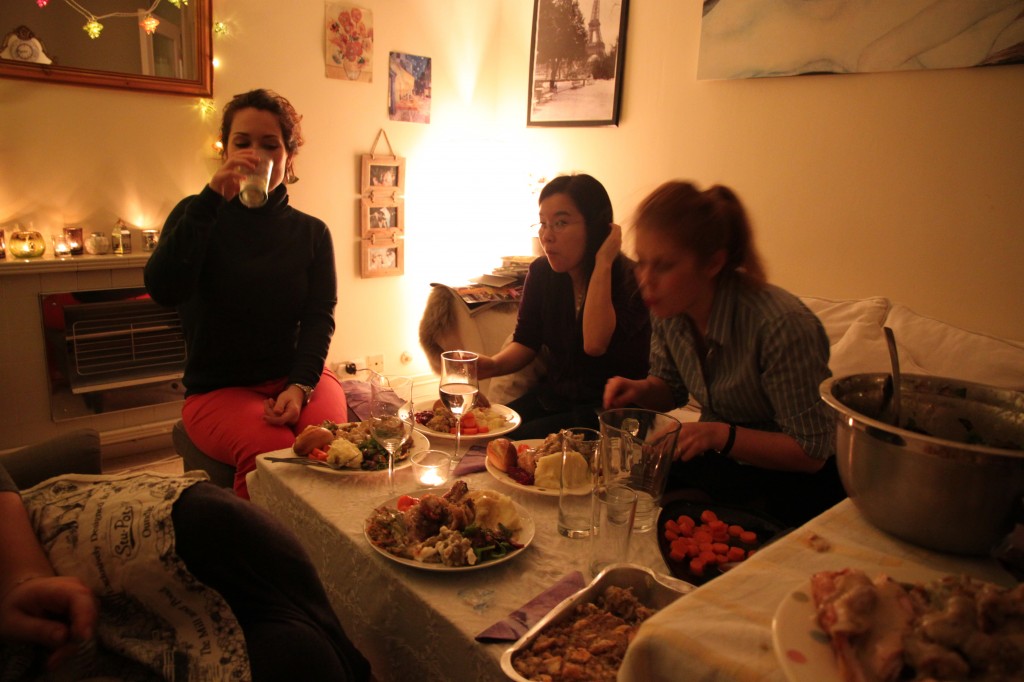 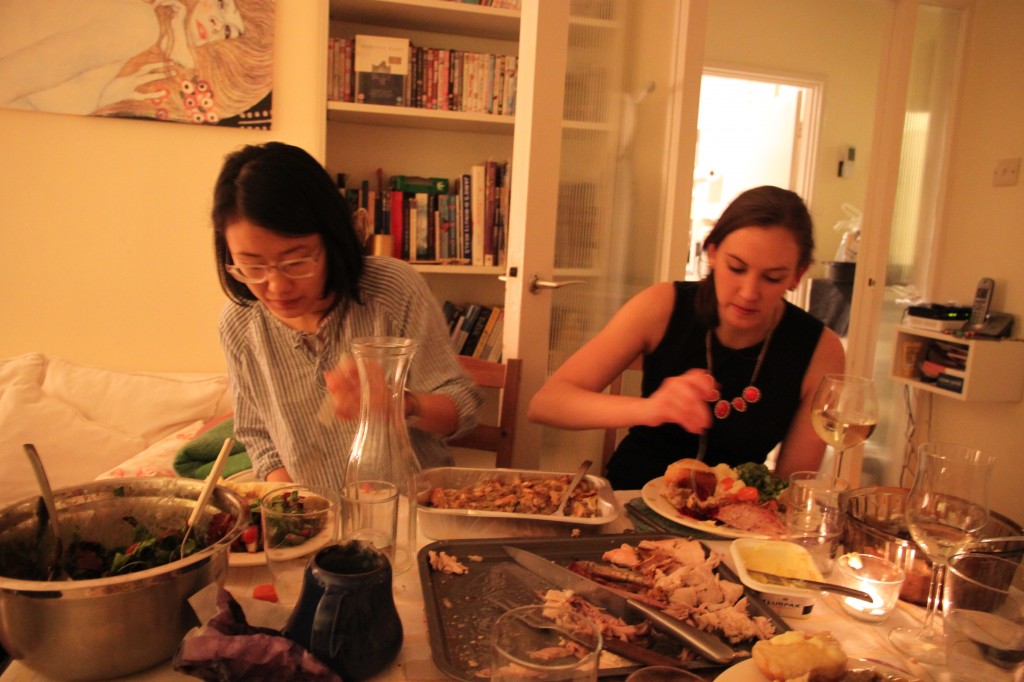 Though I do still miss my family on days like this, I was very happy to spend Thanksgiving with these girls. I am most thankful for the people I’ve met while living abroad. My expat friendships are some of my strongest and deepest and my friendships from living in Rome, Seoul, and London will always be some of my most treasured.