Home > Featured > Greece > Travel > How To Bliss Out On Santorini

Santorini, the largest of Greek’s Cyclades islands, is arguably one of the most famous vacation destinations in the world. If you asked a bunch of Americans where they’d most like to go in Europe, I can bet that the Greek Islands would be mentioned quite a bit.

I was never completely sold, imagining towns full of cruising vacationers and the stereotypical ugly American middle aged traveler. While neither of these are entirely untrue, Santorini is much more than that. 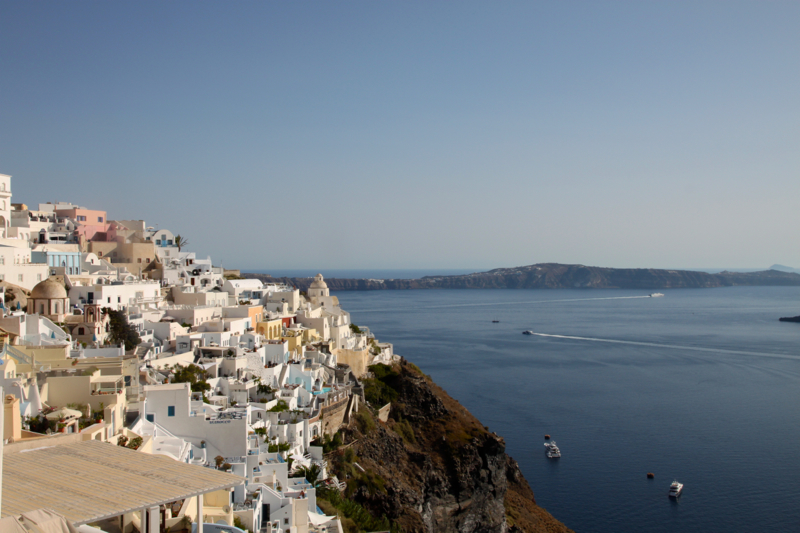 Officially called Thira, Santorini is the largest island in a circular archipelago that is the remnants of an island that was destroyed by a volcanic eruption. With cliffside villages looking out over the sea-filled Caldera, Santorini is postcard pretty. I exclaimed numerous times in the almost week that I was there that it may just be the most beautiful place I’ve ever been.

There’s a lot you can do in Santorini, but there’s also a lot not to do. With beaches and pools and sunsets, Santorini is the perfect place to zone out for a week and forget the Master’s dissertation you should be writing.

Here’s a guide on what to do in Santorini for blissful, stress free actual vacation.

Don’t expect soft white sand and turquoise waters in Santorini, this is a volcanic island after all. Instead you’ll find beaches of all colors (well, a few) with dramatics cliffs rising behind them and the deep blue waters of the Aegean Sea. 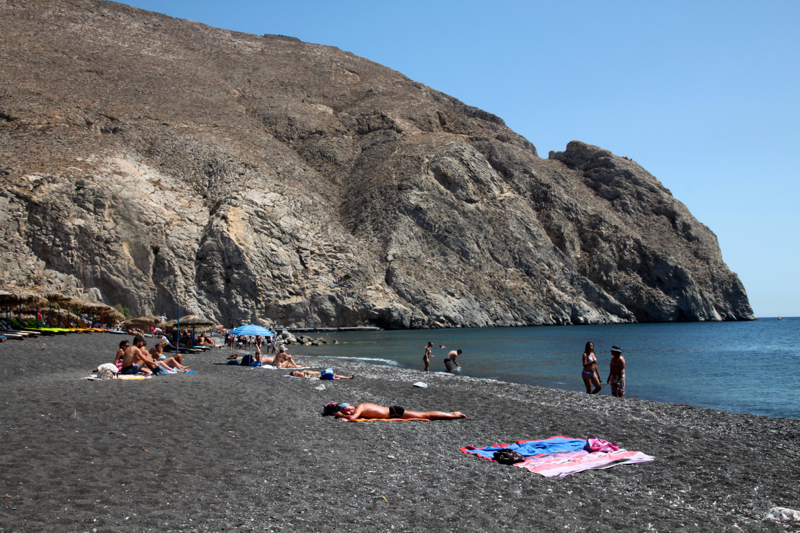 The aptly named Red Beach, located near Akrotiri, is famous because of its vivid red sand and boulders. There are also a few black sand beaches scattered around the island, with Perissa Beach being one of the most popular. This was where I spent most of my beach time, mostly due the proximity to the place I was staying. Deck chairs can be rented for a mere €4 and the beers are just as cheap. Just be careful you don’t burn your feet on the sand. 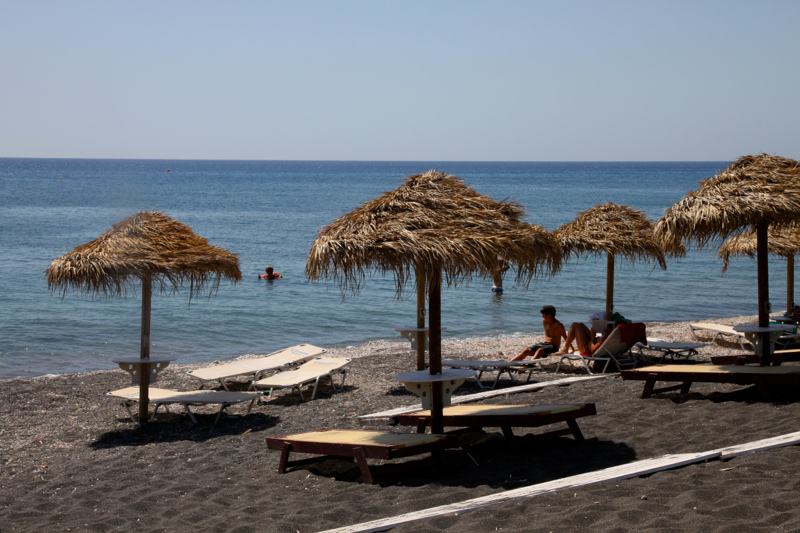 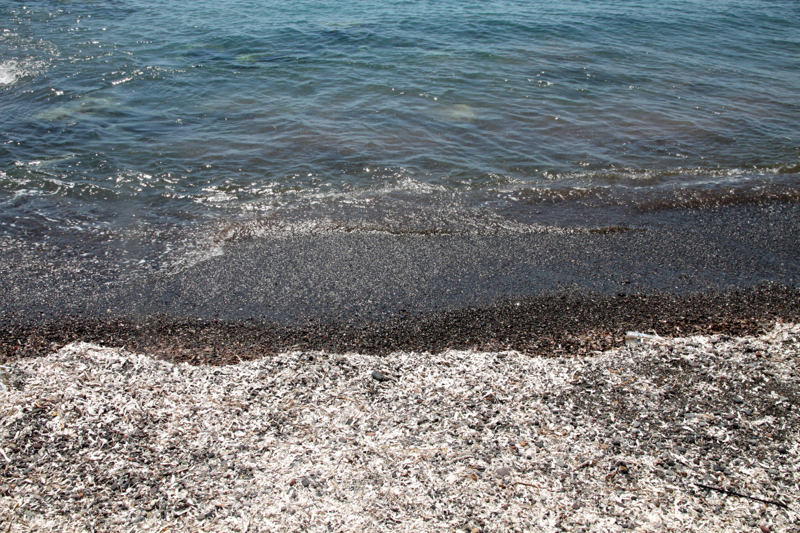 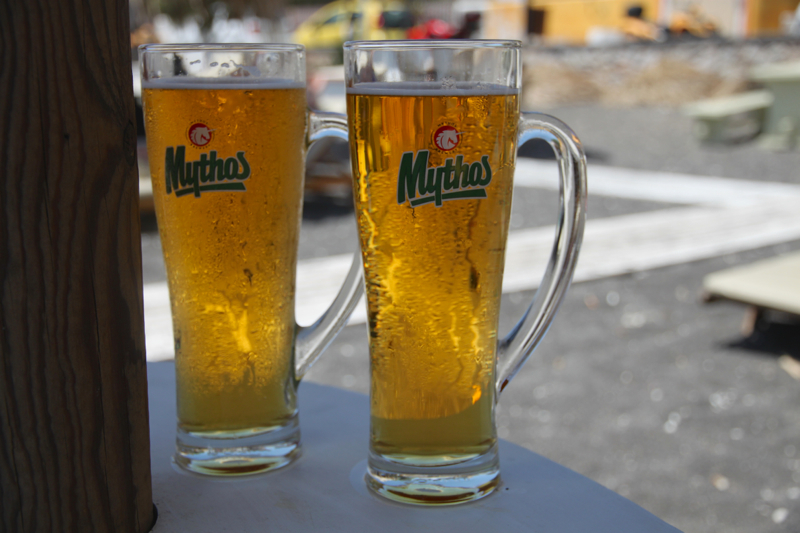 Santorini sunsets are famous for being some of the best in the world. As a perpetual sunset chaser, this was a huge selling point for me. The village of Oia, located on the northwest edge of the island, is the most famous place on Santorini to see the sun set. Here you can watch the sun dip down below the horizon as the sky turns all sorts of orange and yellow and pink behind the oh so Greek blue domed churches, whitewashed buildings, and infamous windmill. I got to Oia a few hours before sunset ready to get the infamous shot only to find that everyone else on Santorini had the same idea. I didn’t want to fight the crowd just to get a spot to stand and wait and ultimately decided it just wasn’t worth it. 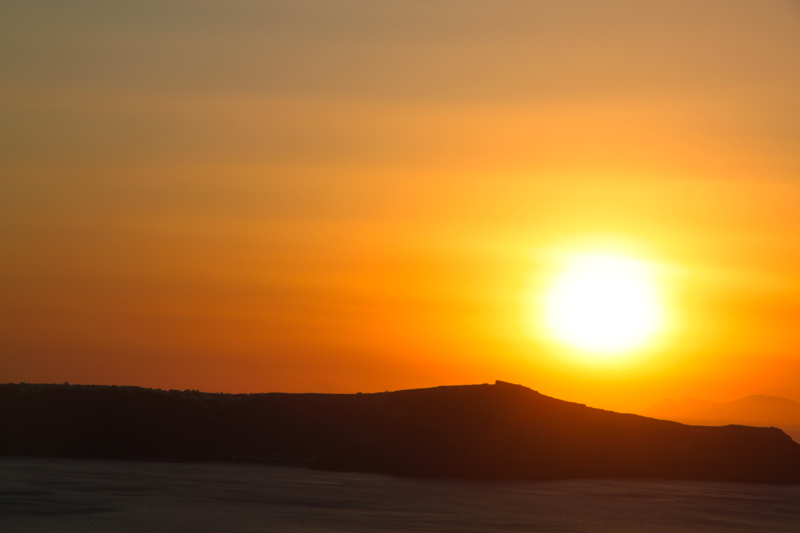 Sunset not in Oia.

Don’t want to battle the crowds in Oia? Don’t worry there are plenty of other places to watch this beautiful nightly occurrence. The island’s capital, Fira, is another village perched high atop the caldera. While maybe not quite as picturesque as Oia, there are plenty of places to grab a drink while the sun goes down without having to elbow masses of camera wielding tourists out of the way. 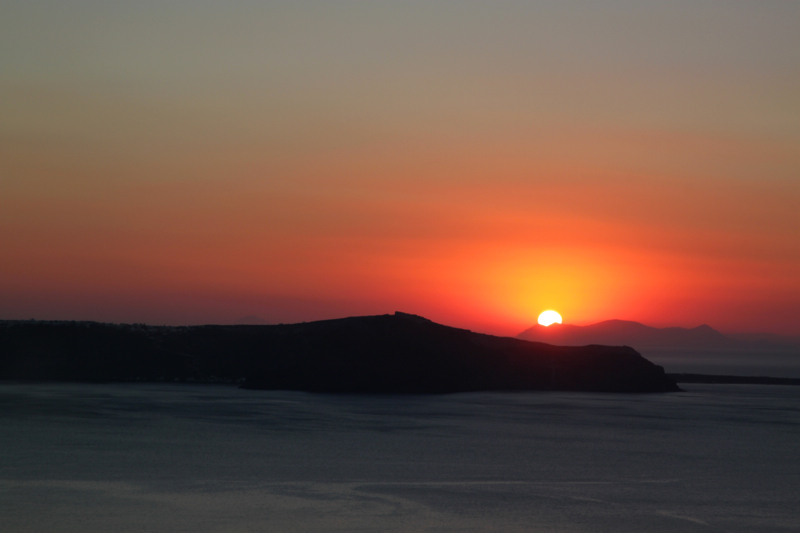 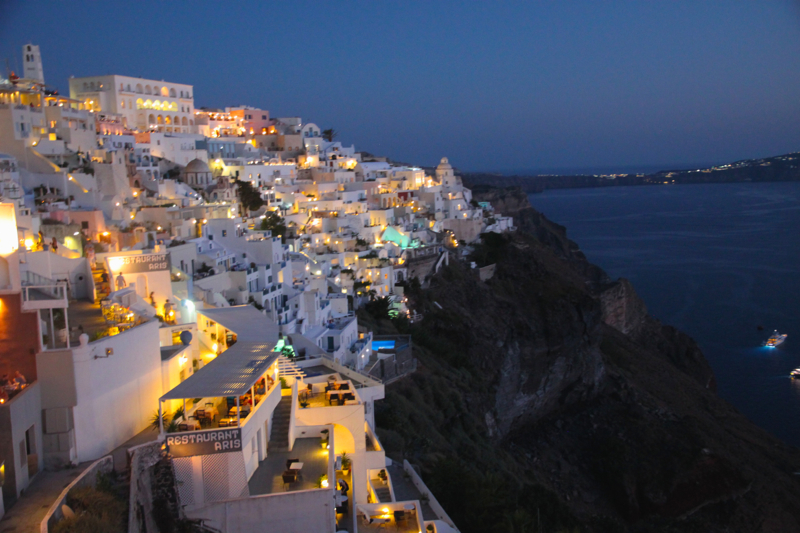 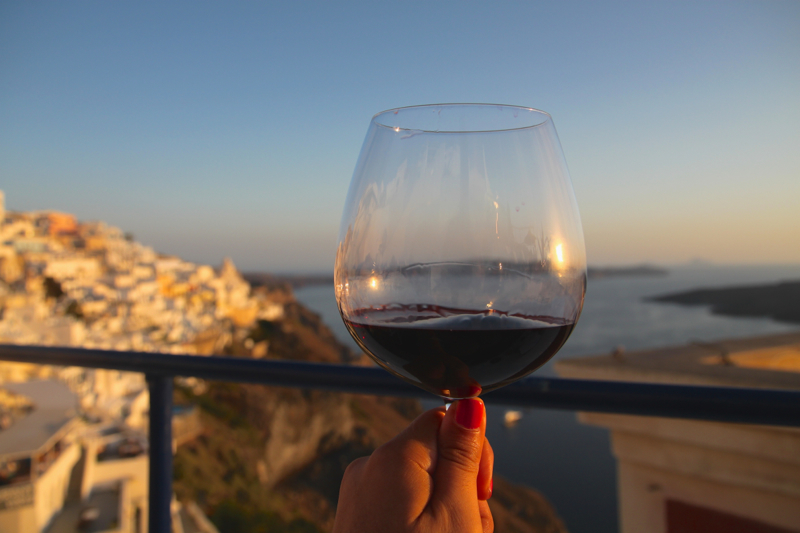 My absolute favorite place to watch the sunset, though, was Santo Wines Winery. With a large terrace overlooking the caldera and bottles of wine for as cheap as €12, this was the perfect place to hunker down for a few hours as afternoon became evening and evening became night. Tara and I ordered a cheese platter, watched a wedding party down below, and marveled at our first Santorini sunset. 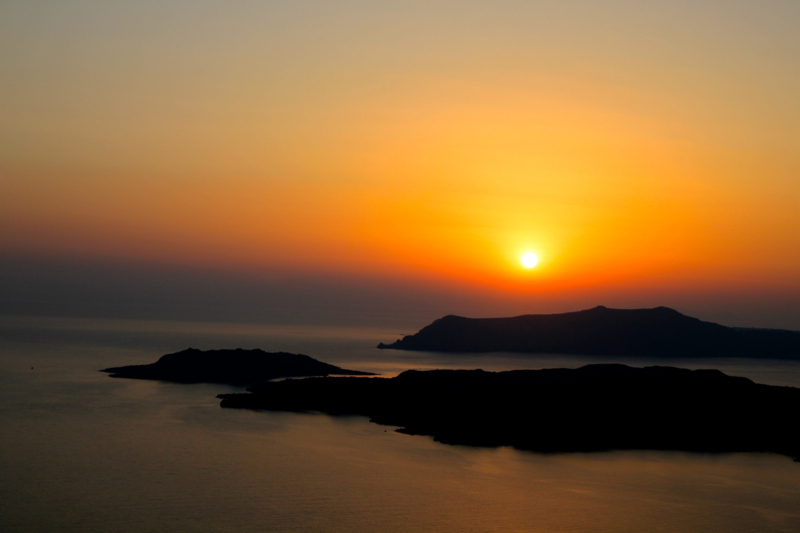 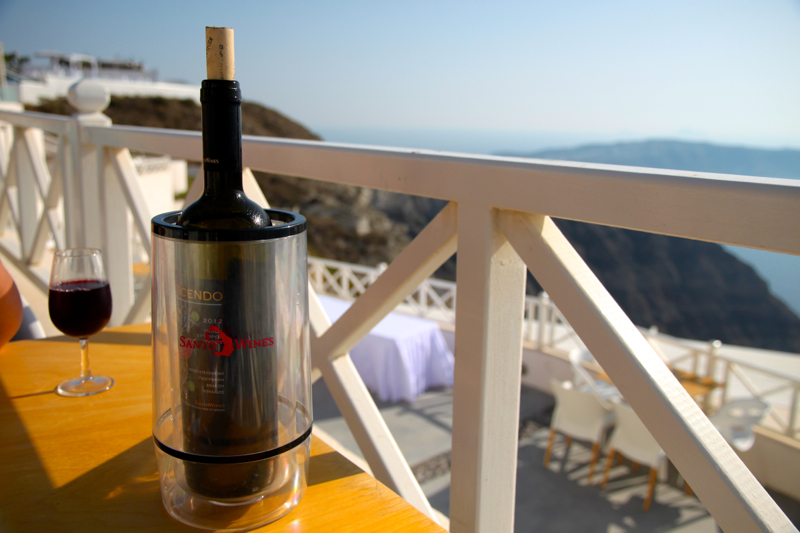 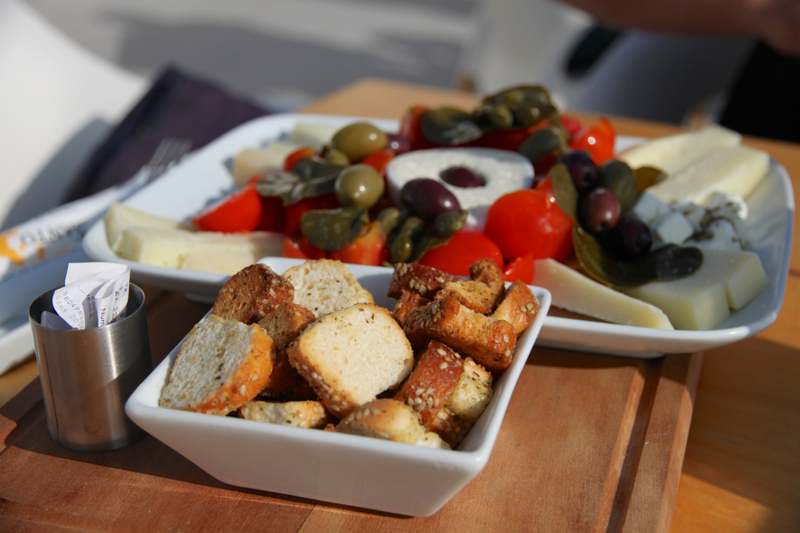 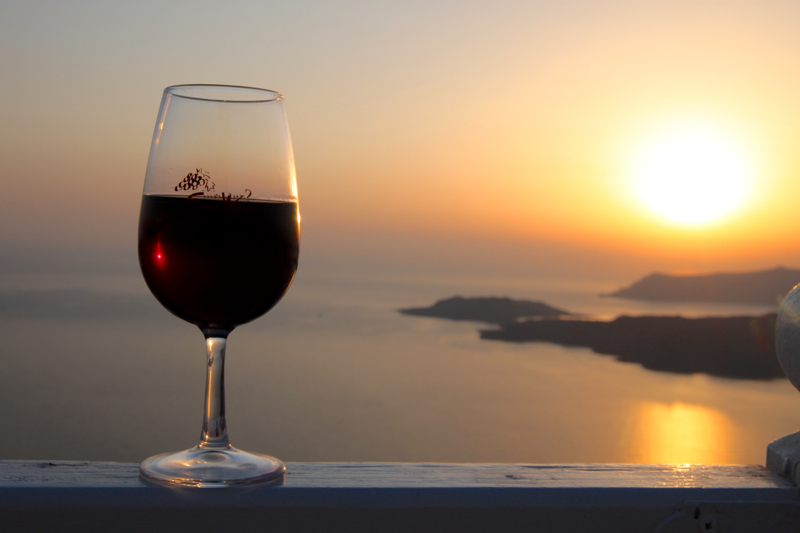 Open-air cinemas are a long standing Greek tradition. While the digital age and economic troubles have forced many cinemas to close, there’s still a place on Santorini where you can catch a a flick outside. Cine Kamari shows movies in English with Greek subtitles, with titles rotating every few days. Admission is €8 and there’s a variety of snacks and drinks (including alcoholic) for sale at reasonable prices. We saw what was quite possibly the worst movie made in the past decade, but still had a wonderful time kicking back and listening to sea breeze rustle through the trees during this unique experience.

Situated in the middle of the caldera, Nea Kameni is a small, uninhabited island that is home to a 130 meter high volcanic crater. The volcano last erupted in 1950 and today it is possible to climb up to the top. The island is pretty much barren, with brown sand and rocks, but that makes it even more interesting. 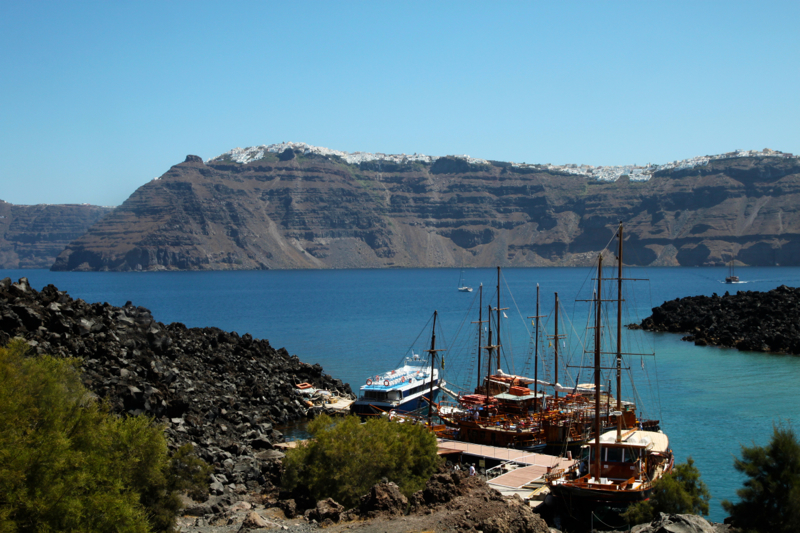 The climb isn’t too hard, and the landscape makes you feel like you’re walking on the moon. Walking the moon while staring out at turquoise waters and Santoini, mind you. 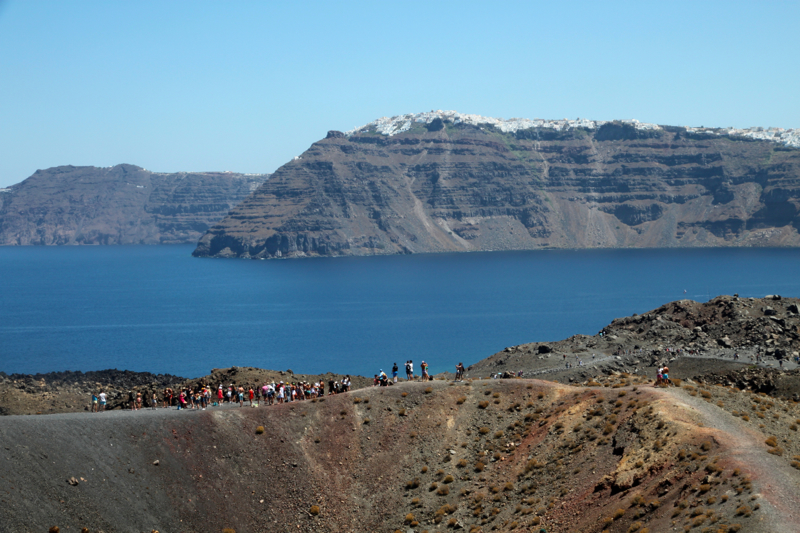 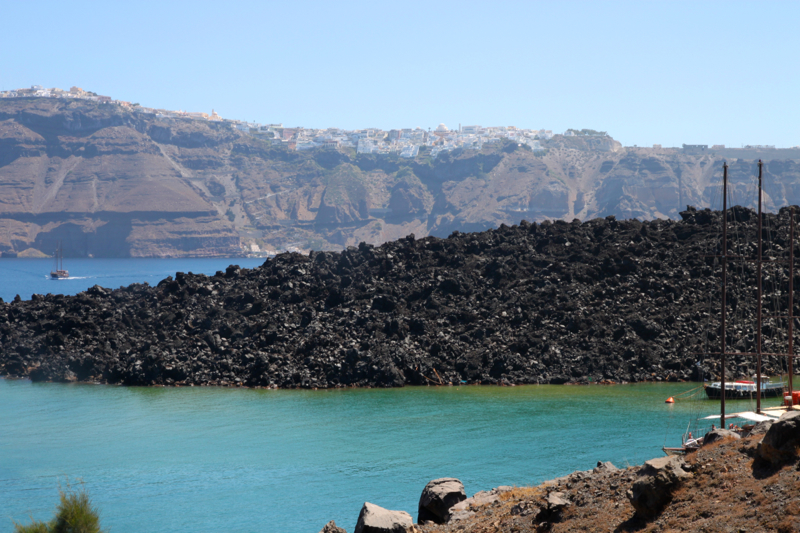 Take a trip to Therasia

Every hotel, hostel, and travel agency on the island advertises some sort of trip to Therasia. This island is the second largest of the island group after Santorini and is home to nearly 300 people, making it a quiet alternative to the hustle and bustle of touristy Santorini. The main village, Manolas, is located up a steep cliff and instead of making the walk Tara and I decided to park it a taverna near the dock for some mezze and beers before a quick swim. 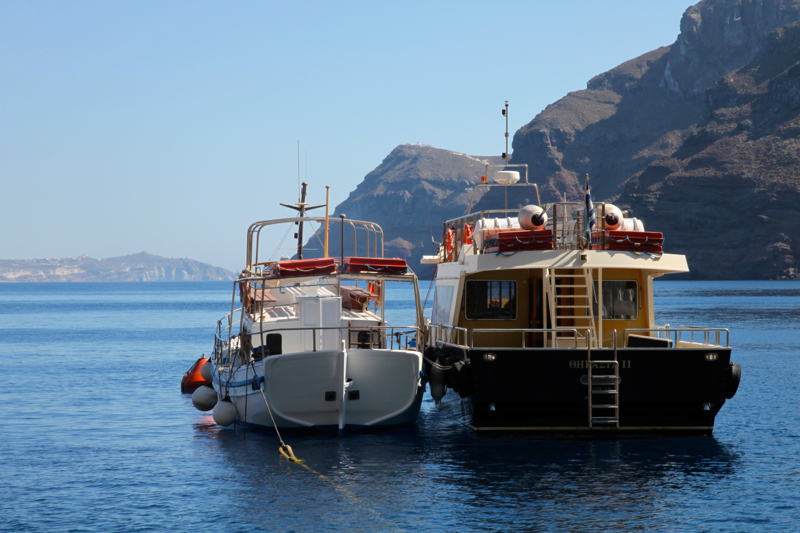 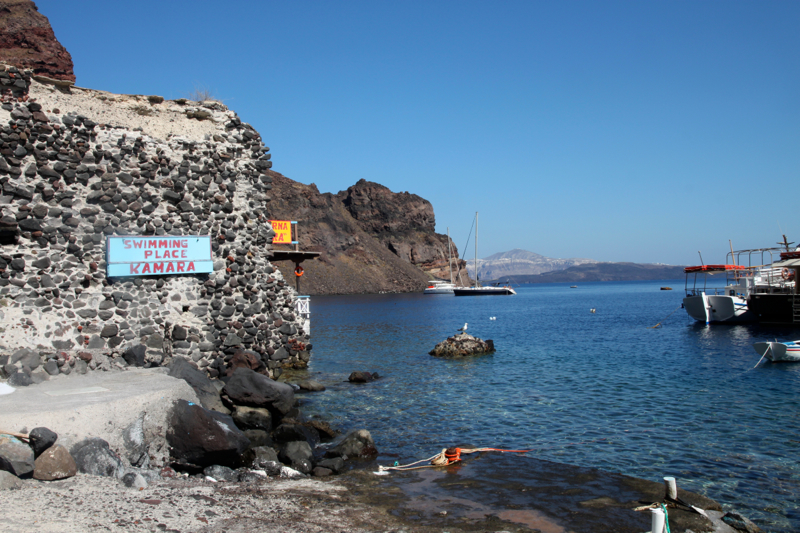 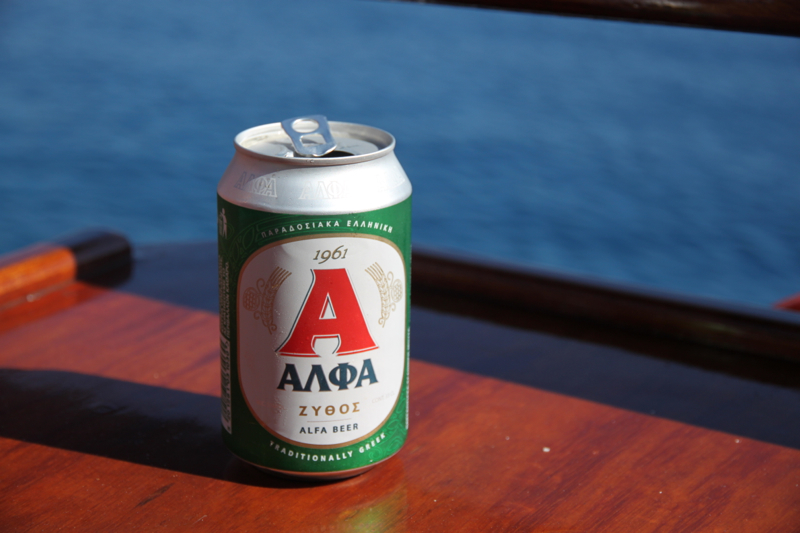 This 35 square mile island is home to many villages, each with their own unique personality. While you might want to dedicate your days to more relaxing pursuits, hitting up a different village in the evening for dinner is a great way to bliss out AND get to know Santorini. There is a bus system on the island, and while rides are cheap it can often be slow, crowded, or confusing. Having your own transportation makes getting around easier, but definitely isn’t necessary.

The two main villages are Fira, the capital, and Oia, sunset heaven. Both are built into the side of the cliffs and are filled to the brim with tourists, though this isn’t necessarily a bad thing.

Oia is everything you imagine Santorini to be and you’ll find yourself stopping every few feet to snap another beautiful church or tiny alley. 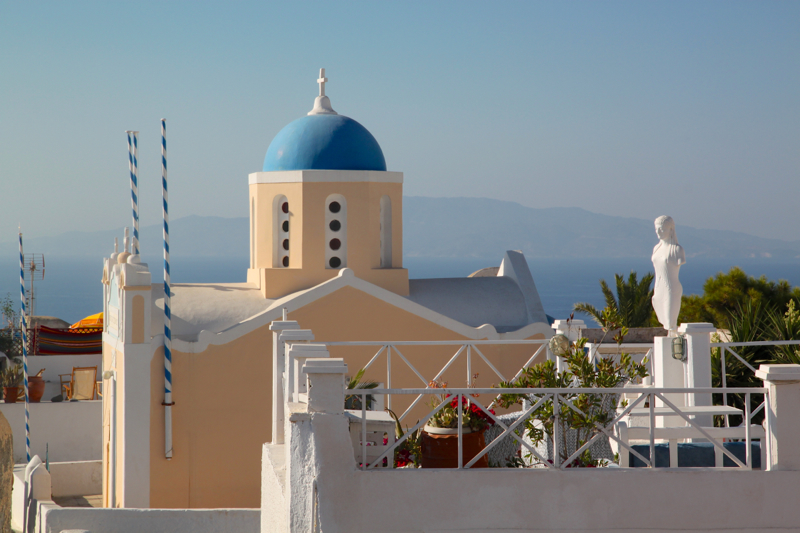 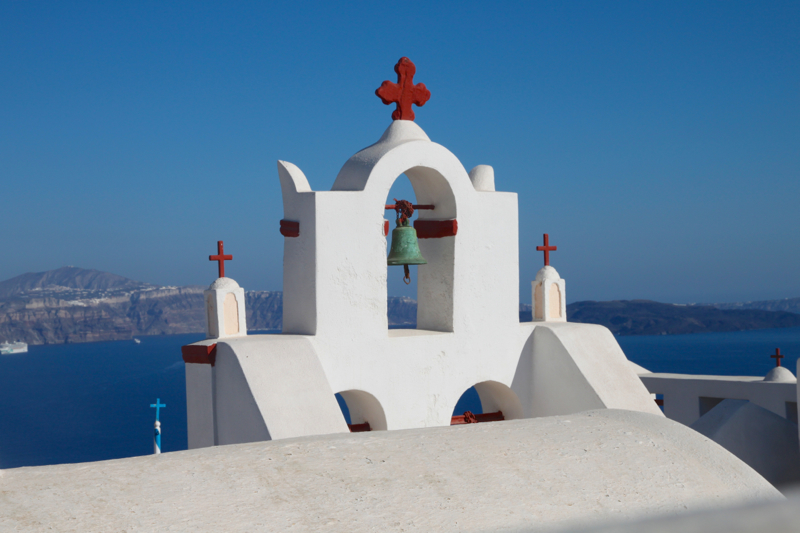 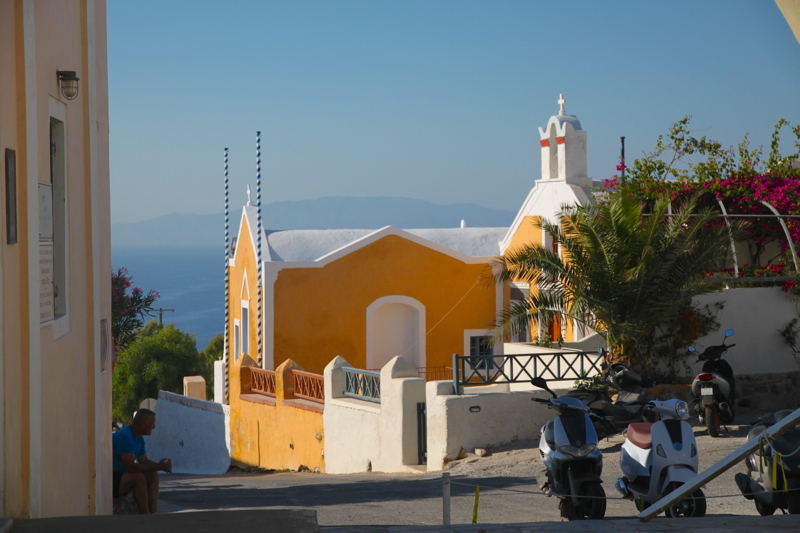 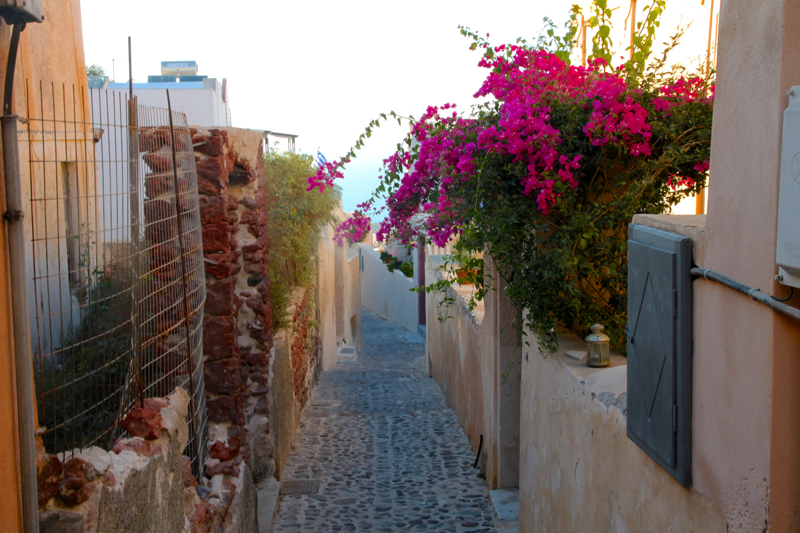 Fira definitely feels the tourist hub of the island, but that doesn’t mean it’s devoid of charm. If you get off the main drag of tourist shops and ice cream stores, it still retains some of that classic Cycladic feel. 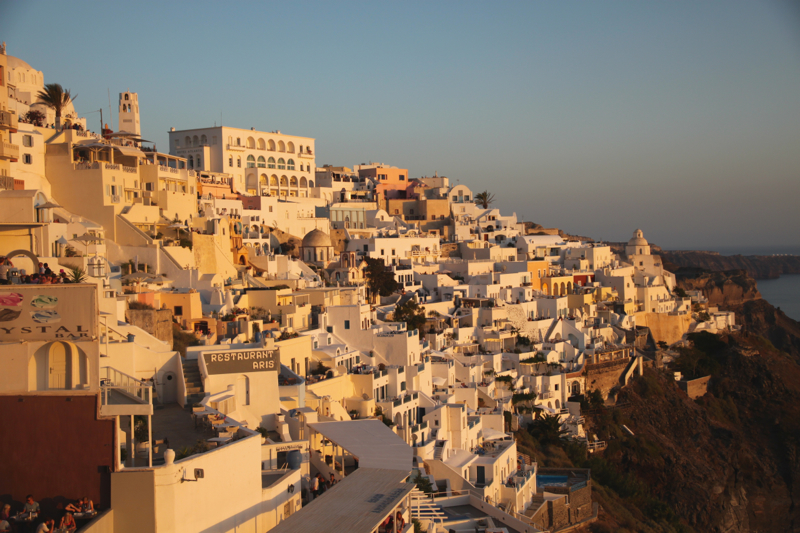 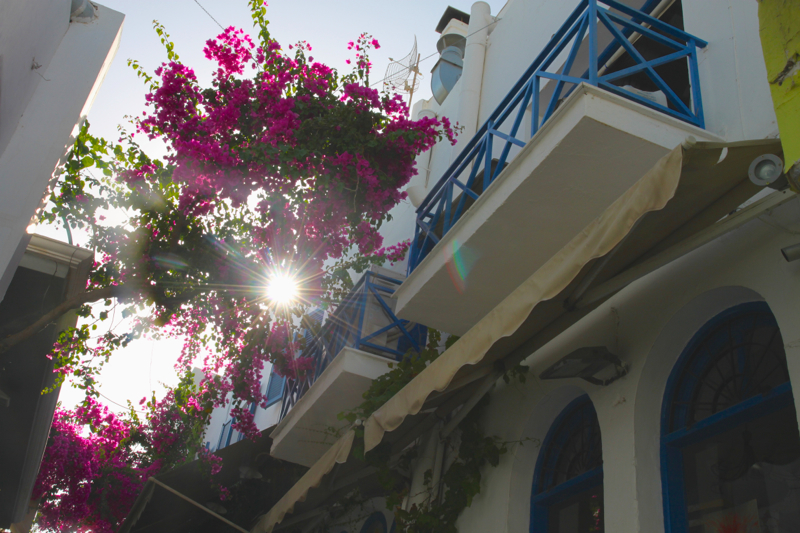 Perissa is the backpacker haven, with cheap fish barbecue restaurants and pizzerias lining a long, dry stretch of road. While you won’t find much to photograph here, it’s a good place to grab a cheap meal and some drinks. 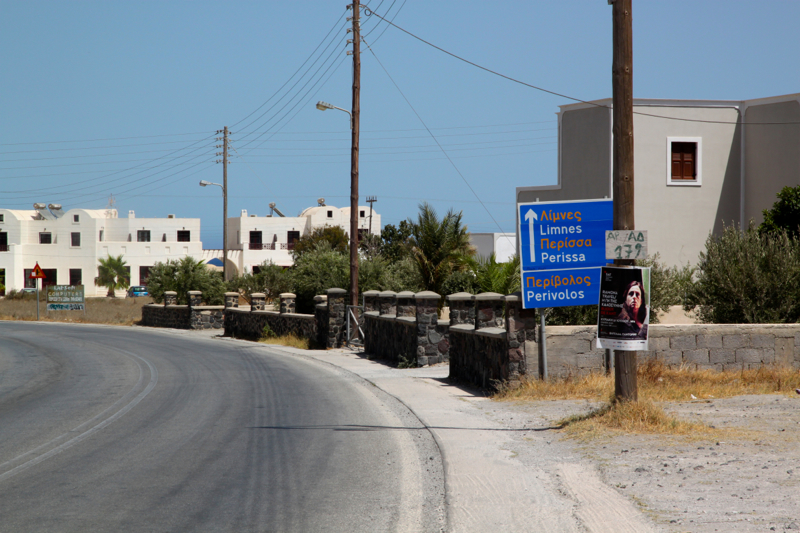 If you want to visit a village that’s a little more low key, make a stop in Pyrgos. This little village has the beauty of Oia without the crowds. I forgot my camera the afternoon I was there, but Alex took some photos that will have you adding this to your Santorini itinerary stat. Santo Wines sits at the outskirts of Pyrgos, making it the perfect place for a wander before some sunset wine.

Sometimes you just need to do nothing at all. I spent two blissful days lounging around the pool at my guesthouse. I’d read until it got too hot, then take a dip in the pool. Then repeat. When I got hungry I walked to the nearest bakery for a €1.50 spinach pie and then returned poolside until it was time to get ready for dinner. It felt nice not to worry about taking photos, or catching the right bus, or dutifully write notes for a later blog post and completely unwind.

How would you like to spend your time on Santorini?