Like, I will plan my entire day in a new city around being in the best place at the right time (usually with a beer in hand) to see the sky change color as the sun makes its way toward the horizon.

I realize this is probably the most cliche thing ever and that sunsets happen pretty much every single day, but there’s something about the beauty of them and the fact that they happen no matter where in the world I am, that makes me happy.

Before we left for Jordan I read Liz’s post about the sunsets she saw while there and hoped that we’d be able to have just one epic evening of dazzling colors. I didn’t know then that there would be four sunsets that were not only beautiful, but helped me truly fall in love with Jordan.

The sunset that made us late for dinner at Wadi Musa

After two days in Amman we began our journey south toward the town of Wadi Musa, the gateway to Petra. When we arrived at our hotel we only had a few minutes to throw our stuff in our rooms before we were supposed to head out to dinner so we could make it in time for Petra by night. 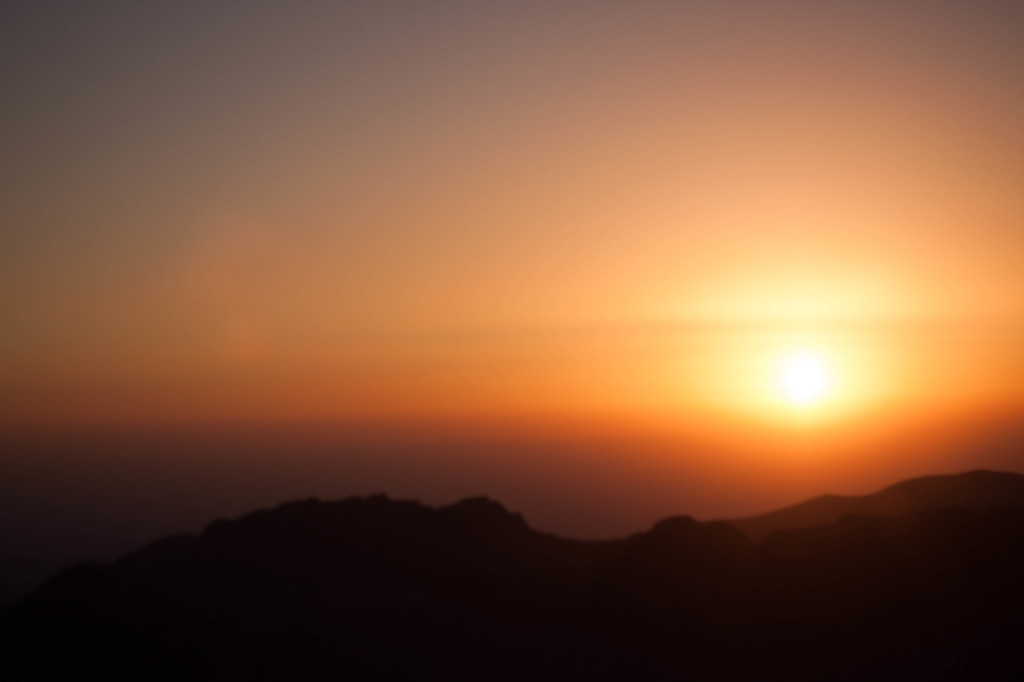 Once we got to our rooms and I opened the balcony door I knew we were going to have to push that dinner back. The Edomite Mountains were beginning to glow gold. This was going to be an epic sunset. We all quickly started gathering camera equipment and ran out to the terrace to begin our golden hour photo shoot. 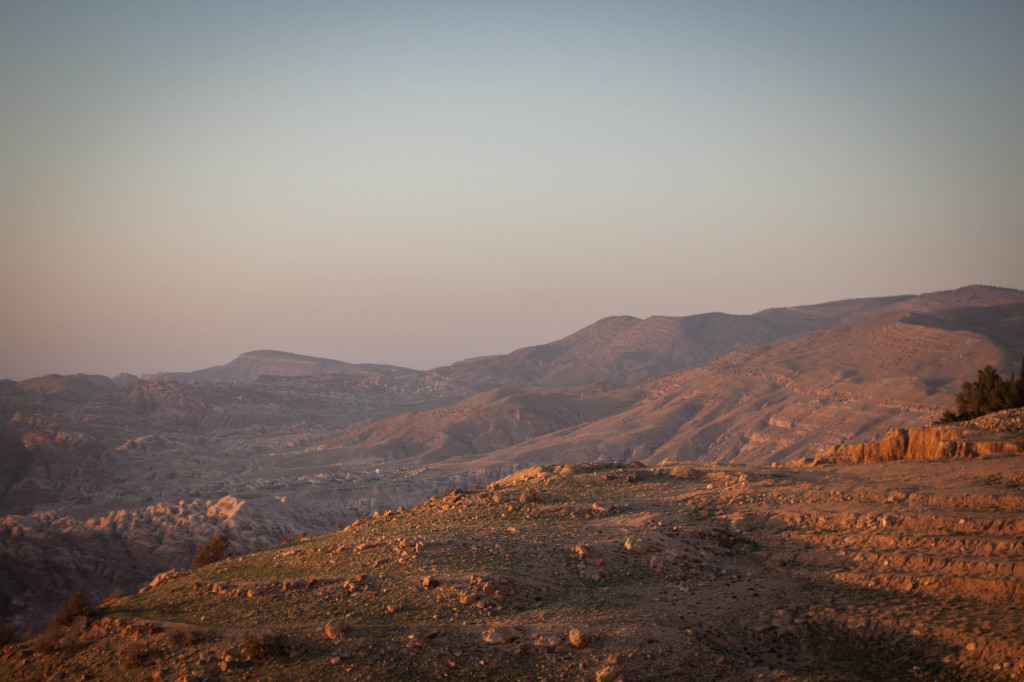 As the sky began to turn pink and orange and red, I stopped shooting for a moment and just smiled. This was a country I was told to be afraid of. This was a country in a region of the world I’d been brainwashed to believe was nothing but unstable governments and harsh climates. But here I was standing with a group of teenage girls on a school trip squealing with delight as I admired one of the most beautiful sunsets I’d ever seen. This was nothing like I’d imagined Jordan to be, but everything that it actually is. 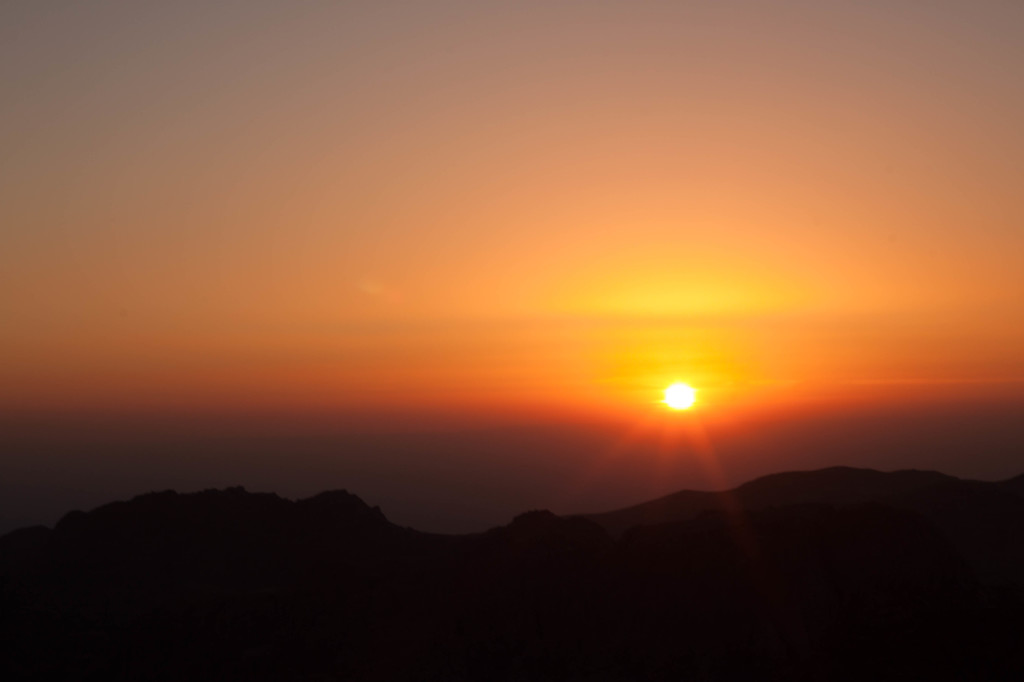 Located in the Dana Biosphere Reserve, Feynan Ecolodge is an award winning eco-friendly hotel that prides itself in not only helping the environment, but giving guests the ability to interact with the local Bedouin community. Our plan at Feynan was to meet with a Bedouin family and then hike up a small hill and watch the sunset. 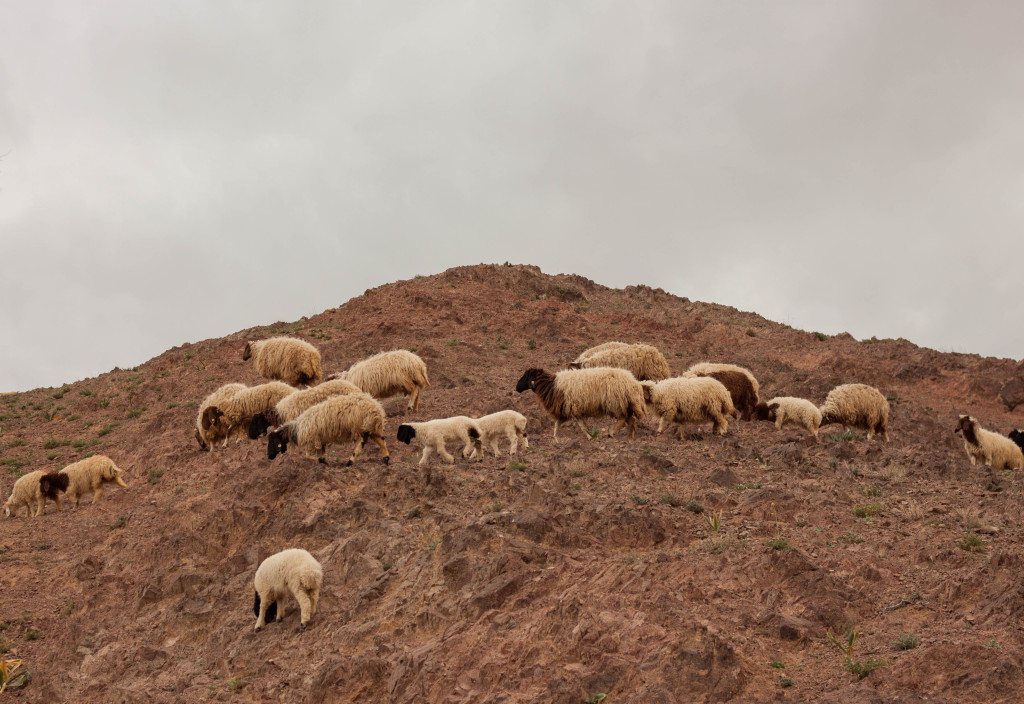 When we arrived it was cloudy and windy and felt as if a storm was brewing. We weren’t sure the sunset viewing would be happening and we began to day’s activities with our fingers crossed.

Our guide, Mohammed, brought us to the tent of a family who lives near the lodge where we learned about Bedouin hospitality, drank tea, and had traditional kohl eyeliner applied by a young girl. The matriarch of the family showed us how to bake a traditional bread underground, something easy that the nomadic men can make while they are out herding the goats. 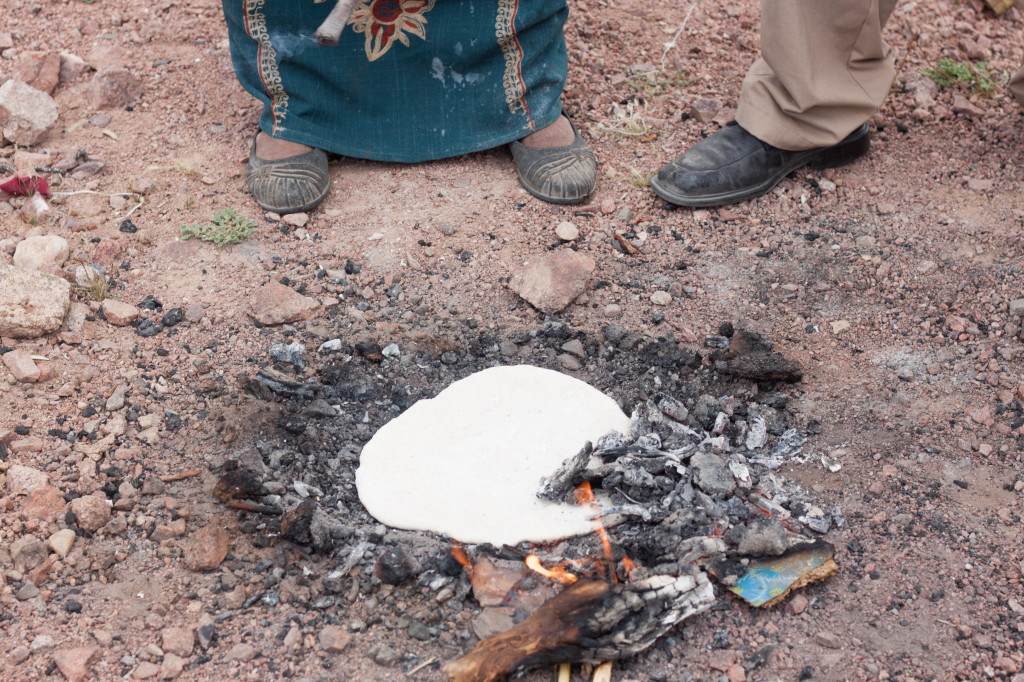 The skies were still cloudy as we began our hike up the hill. We had a choice to make. Should we brave the whipping wind and wait to see if the skies cleared or give up and walk back to the lodge? Initially we started to head back, but then Jessica and I looked at each other and realized we couldn’t give up so quickly. 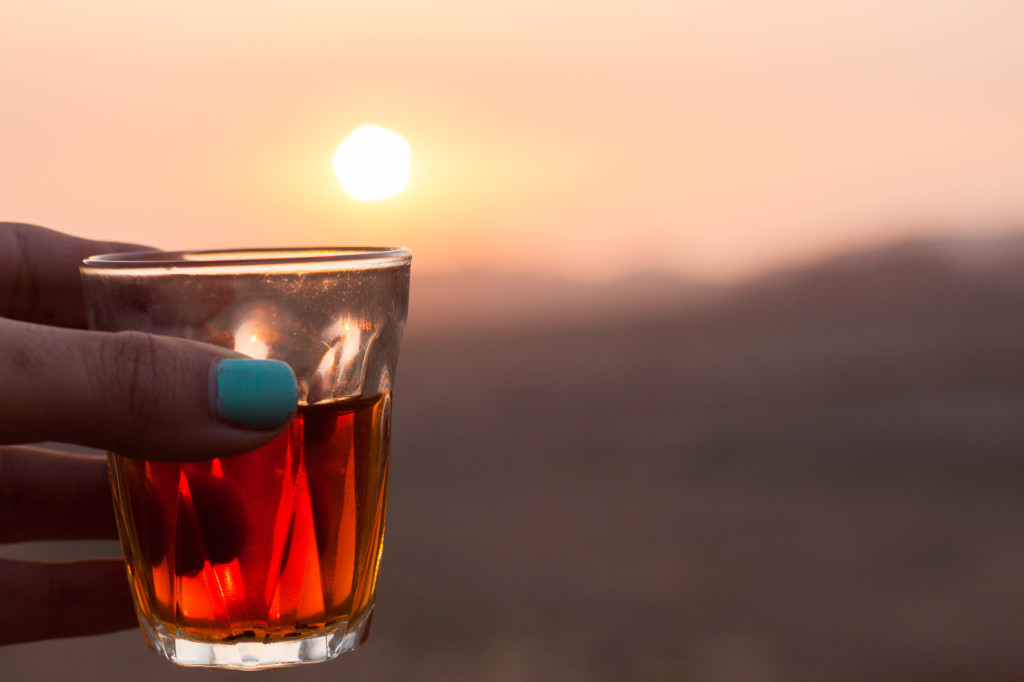 We turned around and with warm cups of sweet tea between our hands we waited. We sat on rocks and talked about politics and feminism in the Middle East and in that time the clouds parted and our wish came true. We saw a truly beautiful sunset. 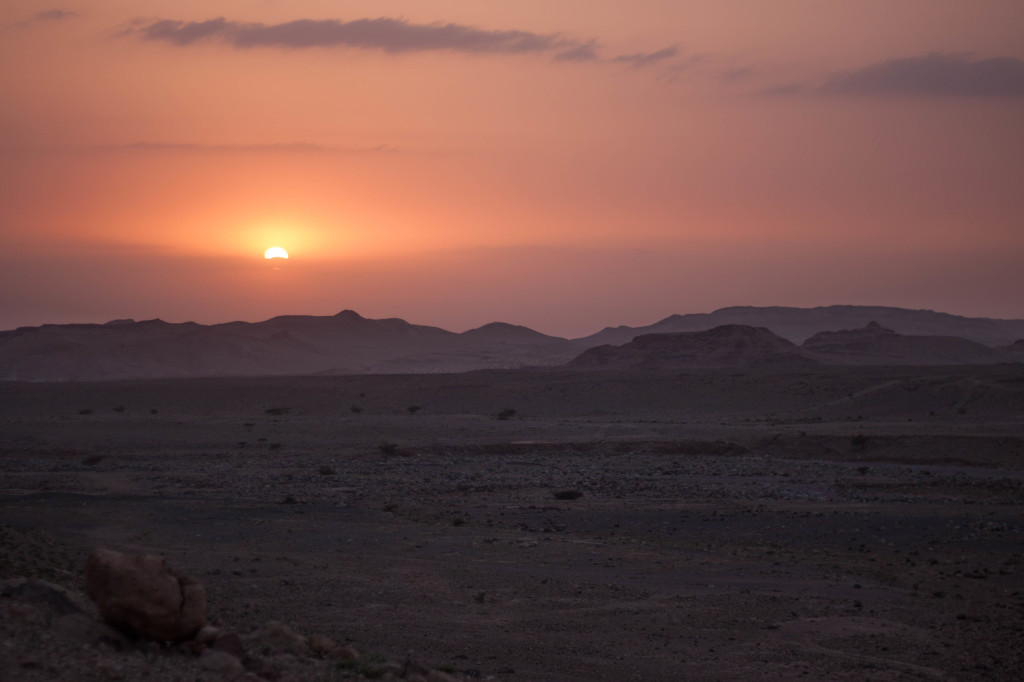 The sunset after I fell off a camel in Wadi Rum

Wadi Rum, known as The Valley of the Moon because of its otherworldly appearance, is one of Jordan’s most popular destinations and one of the places I was looking forward to the most. You see, somehow I’d never been to a desert. Growing up my domestic travels were firmly rooted on the East Coast and this dry terrain was one I’d yet to see. 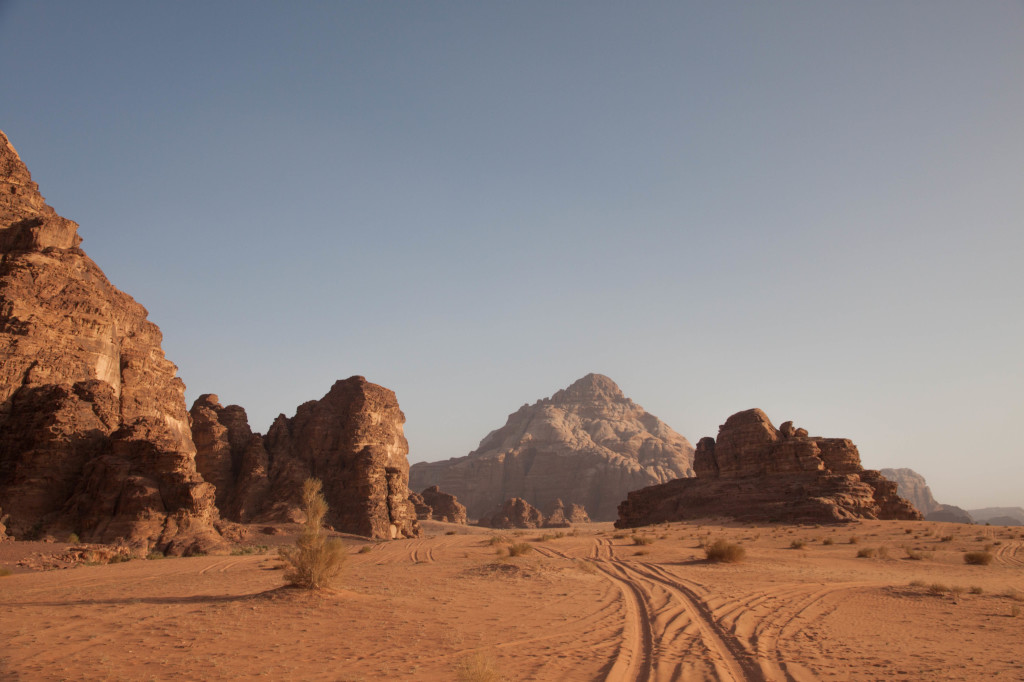 And it didn’t disappoint. We rolled up to Captain’s Camp, a posh camp site run by local Bedouins, and immediately upon stepping out of the can I had a man tying a shemagh mhadab around my head. While traditionally worn by men, this checkered scarf would provide good protection against the wind and sand in the desert. (And when I walked out in mine it was pronounced that I looked “full Arab”.) 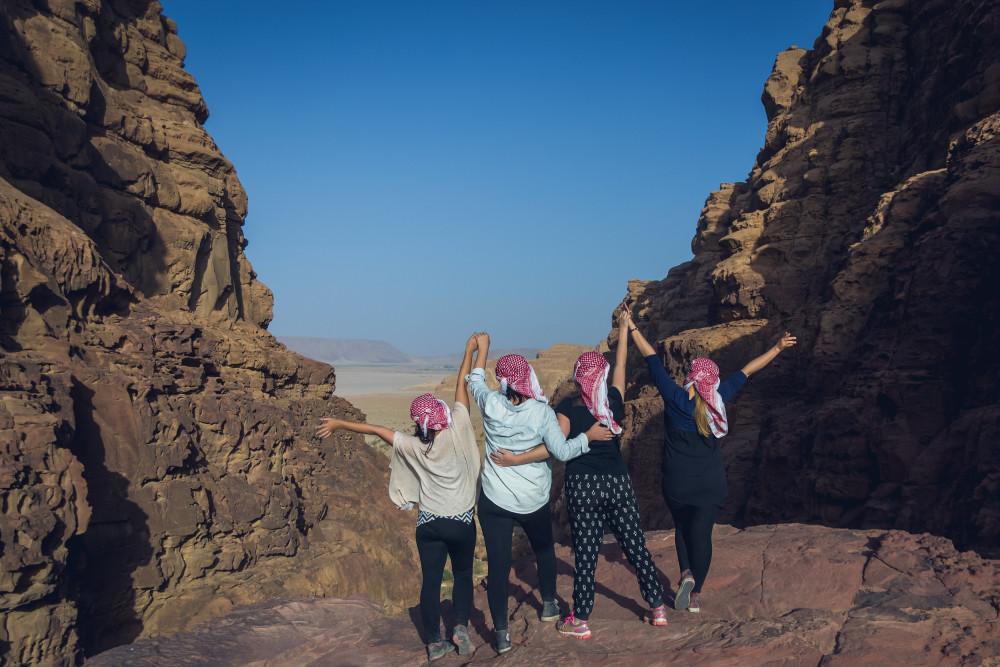 After some sweet Bedouin tea, we climbed into the back of a pickup truck and began speeding up and down sand dunes and around huge rock formations. Then we reached the camels. Leading up to this, everyone else had been scared to ride the camels and I was the one saying, “Oh no, they do this all the time. No on is going to fall off.” 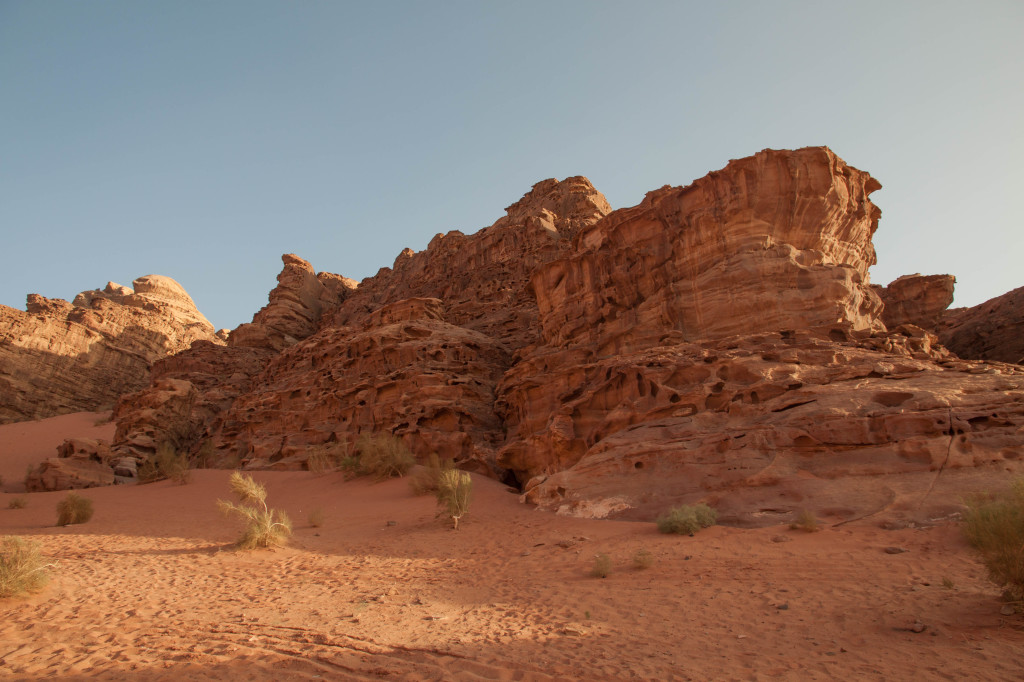 Well, someone did. And it was me.

As I was mounting the camel it started to stand up and I immediately knew things were going to end badly. I thudded to the ground on my back holding my camera out in front of me, luckily saving it from any damage. I laid on the ground stunned for a while and once I got up I promptly declared that I would never be attempting to ride one of those creatures again.

That was apparently not an option (you know what they say about getting back on the horse) and I soon found myself white knuckling the saddle as we were led around the desert. 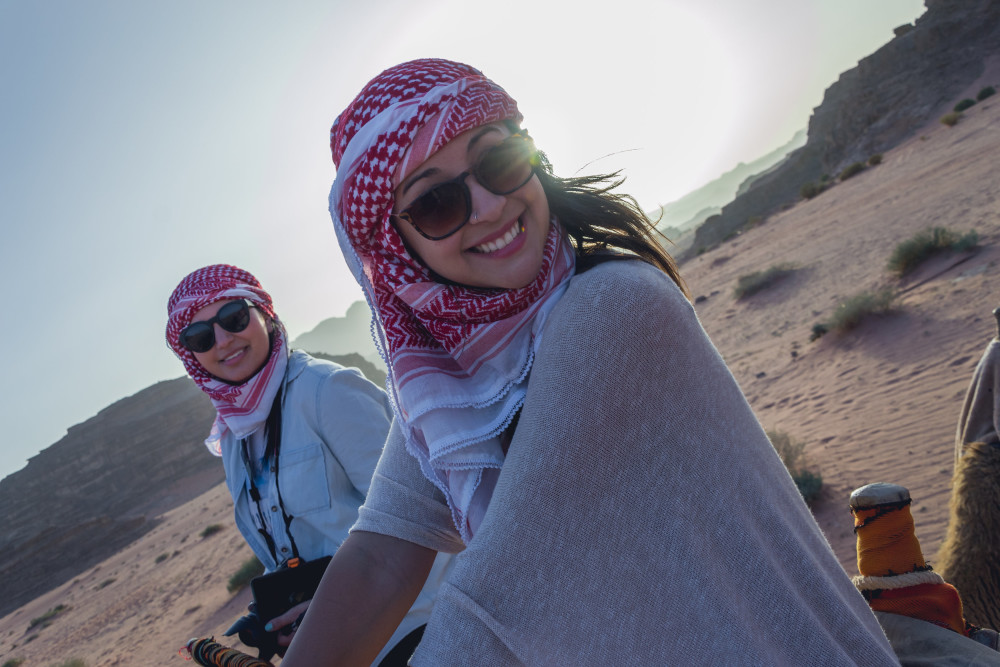 We dismounted with just enough time to climb up a small rock as the sun began to set. My back hurt and I was dusty and tired and wanted to lay in bed and cry, but then I saw the herd minder tenderly leading his camels away and our Bedouin driver carefully building a fire next to jeep to brew more tea and I realized the pain didn’t matter so much. 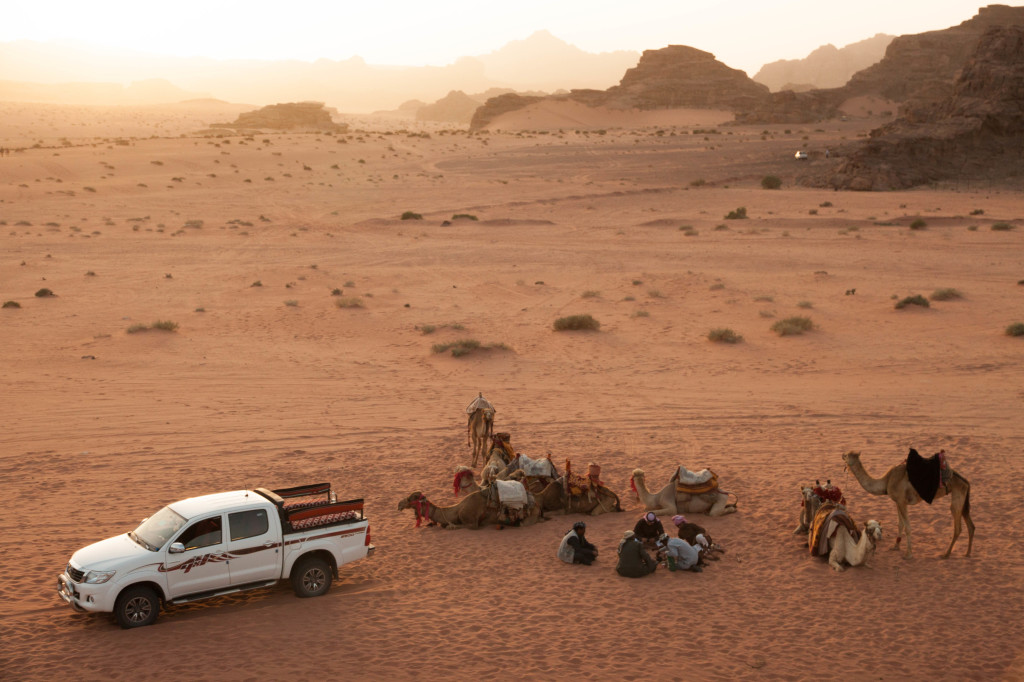 The yellow sun dipped below the red earth in a place like no other I’d ever seen before and I felt so happy to have seen such beauty, even if it involved falling five feet onto my back. 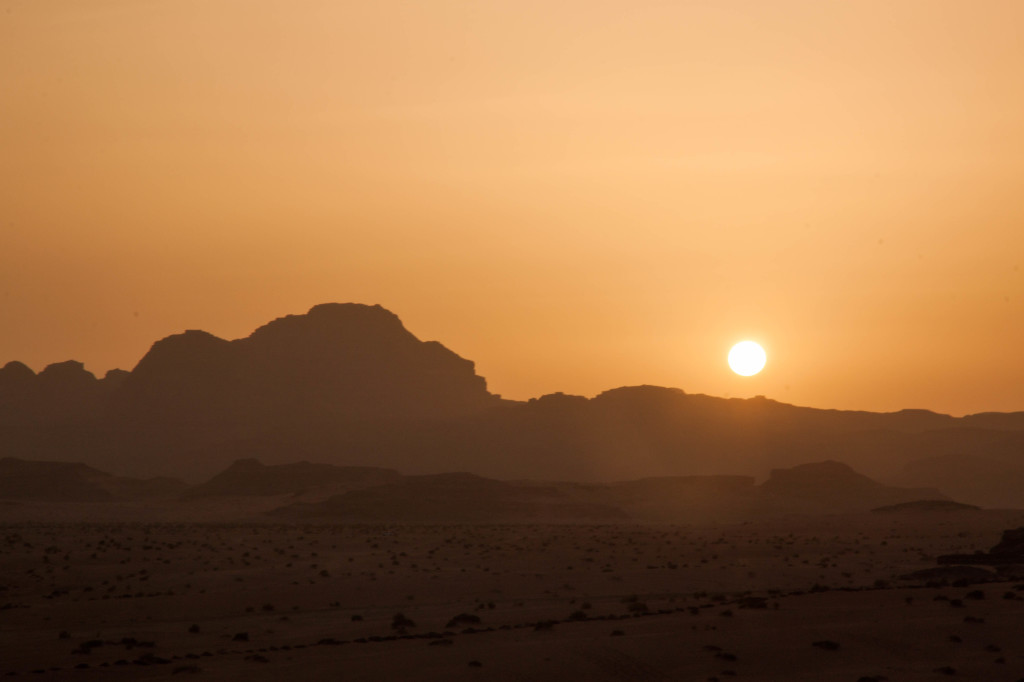 Sunset shisha at the Dead Sea

On our last night in Jordan we wanted to do something special. And by something special I mean have a drink. We headed down to a poolside bar at the Crowne Plaza Dead Sea Resort for a sundowner and shisha before dinner. The sunset itself wasn’t that impressive. There was a storm brewing over the Dead Sea and most of the colors were covered by thick clouds, but it was the company and culmination of a great trip that made this sunset memorable. 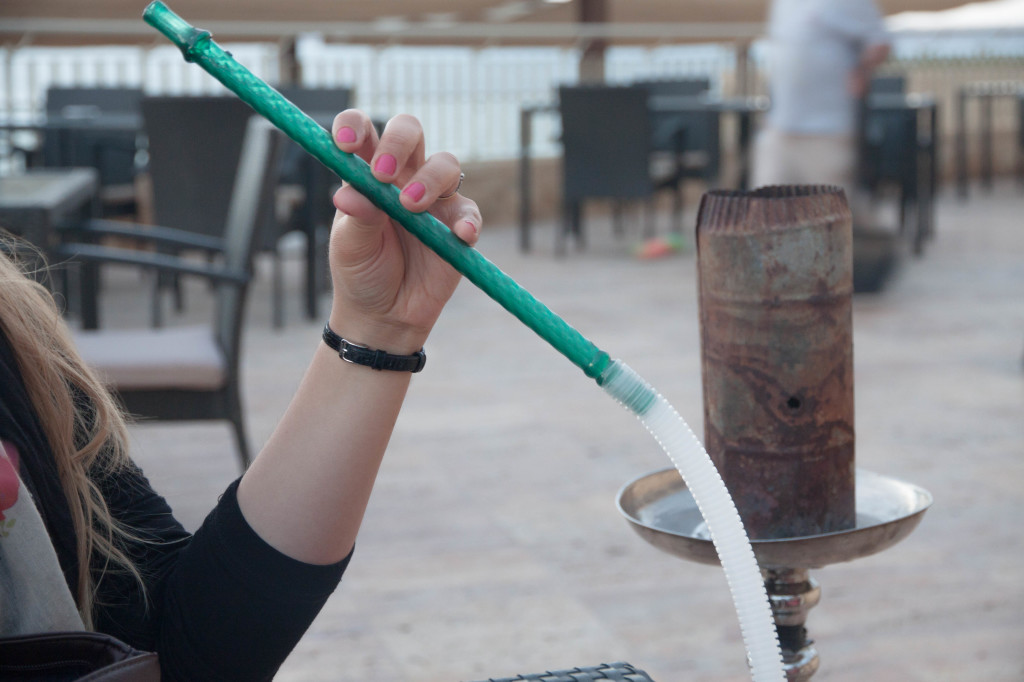 Ashley, Jessica, Julika, and I spent an hour or two reminiscing about our favorite Jordan moments and how much we were going to miss the hospitality, history, and rich culture of this country. Okay, we also spent a lot of time laughing about how Ashley had to be rescued by lifeguards earlier that day while swimming in a body of water in which it is impossible to drown. 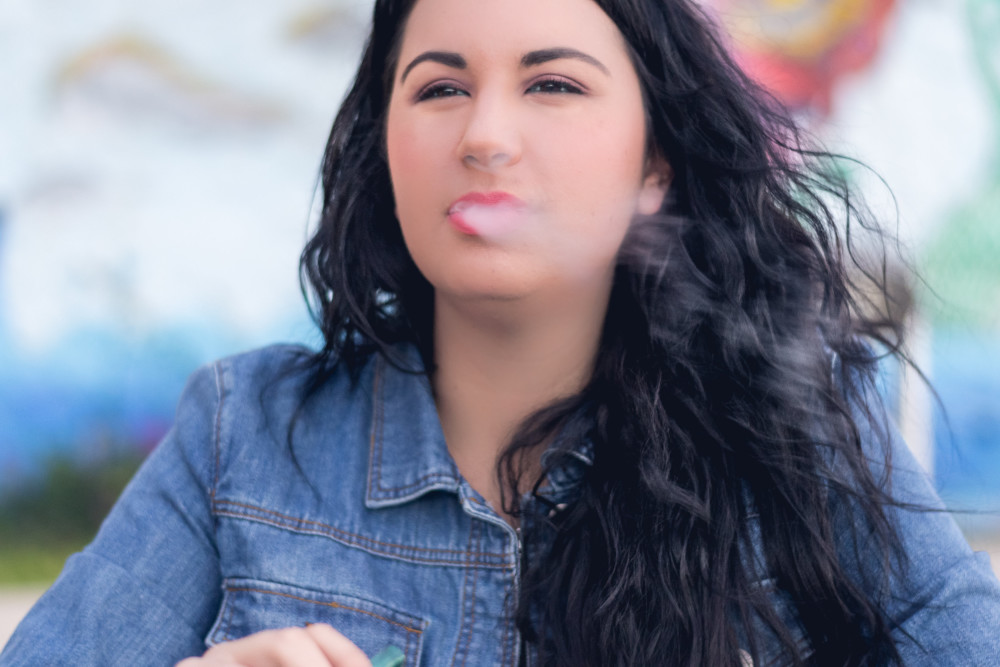 I always feel sentimental when I catch the sun setting on my last night in destination that meant a lot to me and as the sky got darker and darker I could feel myself getting a bit sad. I felt that familiar pull at my heart. The one I get when I don’t want to leave a place or a person. As a traveler, though, leaving is inevitable but it was this sunset that made me vow to one day come back and experience Jordan once again. 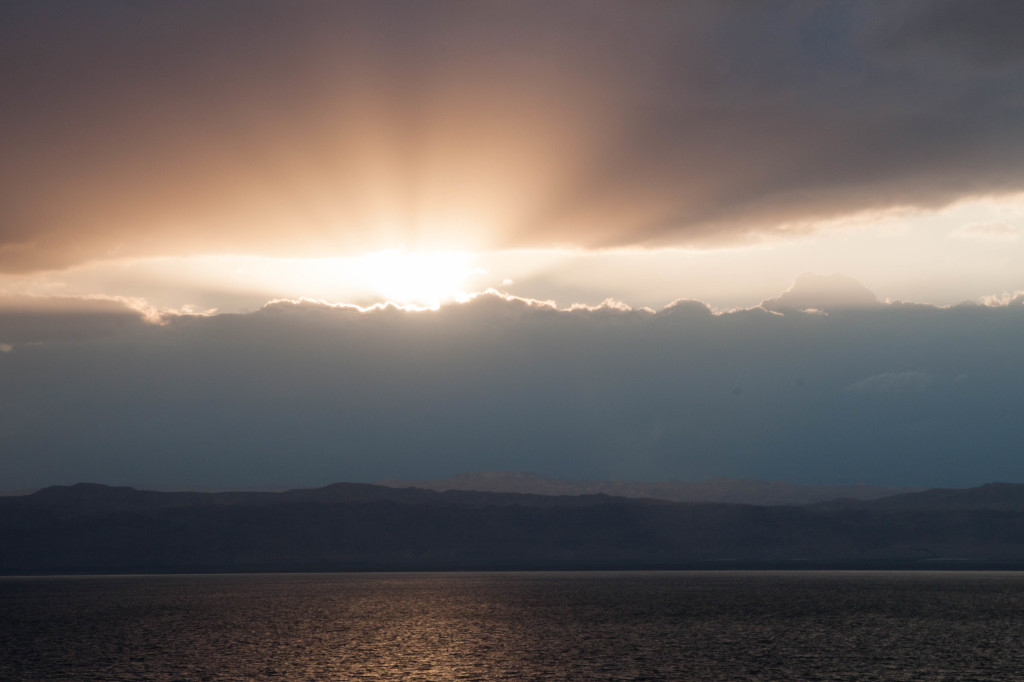 Which is your favorite Jordan sunset?

Disclaimer: I was a guest of the Jordan Tourism Board, but all opinions are my own.