I had long dreamed of visiting Auschwitz. In fact, the entire reason behind wanting to go to Poland in the first place was so I could visit the former Nazi concentration camp.

You see, I’ve forever had a strange fascination with the history of the Holocaust. As a child I read every book I could get my hands on that related to the event, did projects about Anne Frank at school, and planned trips to visit sites in countries I’d barely heard of. It might seem strange that a 10 year old would be so interested in an event where millions of people were killed, but I was.

I’ve visited other so called “dark history” sites before- the Killing Fields in Cambodia, Seodaemun Prison in Seoul, and Dachau Work Camp outside Munich. The visits had been somber. I had held back tears. I wandered the grounds alone or with friends. I could learn and pay my respects to those who had suffered in the way that I chose. 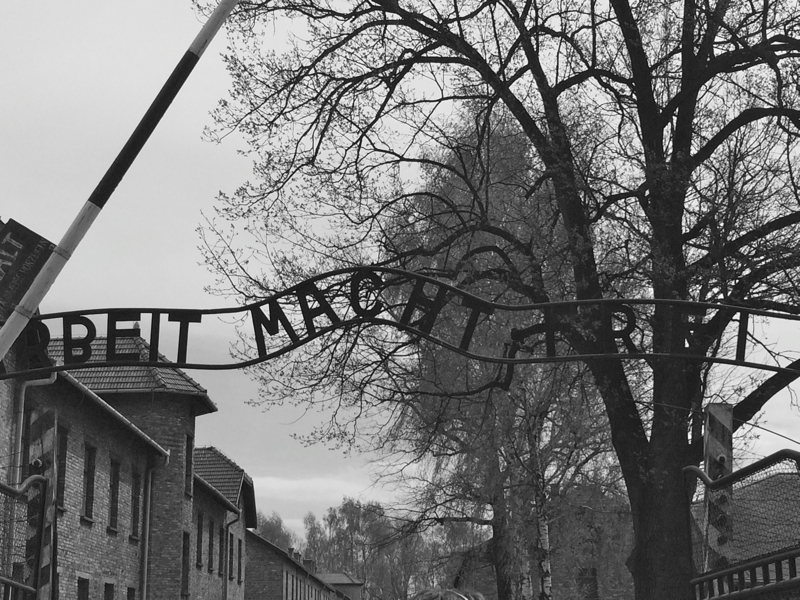 I arrived at Auschwitz in the morning to find crowds of people waiting to be sorted into groups outside the entrance. From August to October it is required that visitors join a guided tour if they arrive at Auschwitz I between 10 am and 3 pm. While I’m not a fan of guided tours, had I hoped this would provide some added insight to the day.

After being assigned a group, I was handed a headset and we were on our way. Our guide, who seemed extremely uninterested in the whole thing, led us into the camp. Maybe because I’ve read so much about the event or maybe because the US teaches the Holocaust every year as part of its history curriculum, but I found most of what the guide said throughout the day to be simple facts that I already knew. Nothing further.

We entered the first block, which had been turned into a sort of museum, and were quickly ushered through will the guide gave us a quick rundown of the facts. We continued to walk through these blocks, some filled with the luggage of people brought to Auschwitz from all over Europe and other with the eyeglasses of those who never left, without any time to stop, look, or thing. One tour group in front of another, weaving our way through the blocks.

I listened and I looked and I felt nothing.

The tour ended. I ate some zurek in a cafeteria next to the car park. I thought about what I just saw. Th place I’d just been. The things that had happened there.

The visit to Birkenau was better, in the way a visit to a concentration camp could be better. You could freely walk around the grounds. The blocks hadn’t been converted into mini-museums. It was easier to get an idea how horrible things had been, how something like this should not happen again.

Still, though, there was a sense of commercialization. Of a sort of theme park effect. Am I wrong to expect that others treat these type of places with a sense of respect and dignity? Why would you even want a photo of yourself smiling in front of a train that carried Jews from Hungary to their death in Poland?

While Auschwitz may not have been what I expected, I do still think it is a necessary trip.

Genocide was not ended in 1945. Since then there have been genocides in Cambodia, Bosnia, Rwanda, and Darfur, to name a few.

We need these reminders. We need to visit sites that make us uncomfortable. We need to stop these things from happening.